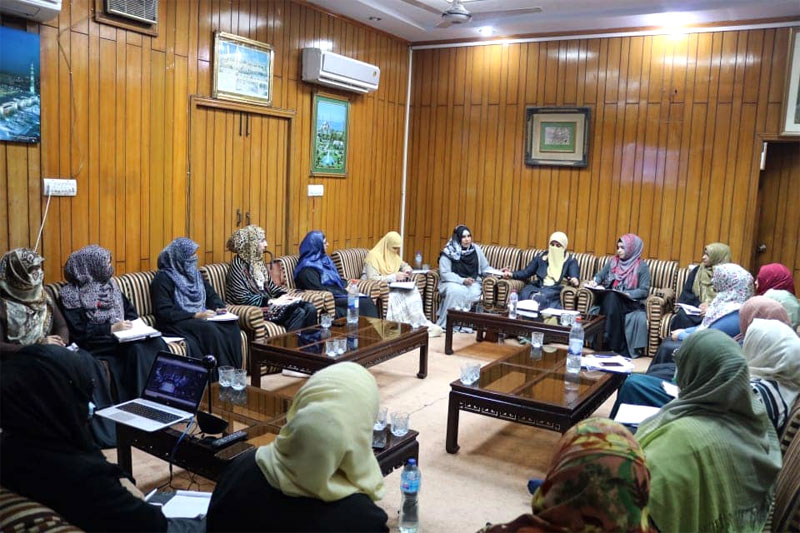 The Central Working Council of Minhaj-ul-Quran Women League held its monthly meeting at the central secretariat of MQI in Lahore. The meeting was presided over by President MWL Pakistan Dr. Farah Naz and General Secretary MWL Ms. Sidra Karamat.

Firstly, the Milad campaign was reviewed in the meeting as the main agenda point. The supervisor of campaign, Ms. Anila Ilyas, presented the overall report of the Milad gatherings and conferences held countrywide under the department of Dawah and Training. She also shared her analysis on the execution of programs and their results. The house appreciated her efforts and congratulated her and her team on executing the plan quite well.

Furthermore, the agenda of Mehfil e Ghous-us-Saqalayn was opened in the house. Each member presented her opinion. After the whole discussion, mehfil was planned and members were allotted different responsibilities.

Later on, "Training of Trainers" was planned for the MWL office-holders at the central secretariat regarding "Fahm-e-Din course" and the date was finalized in the meeting. The agendas of parents counseling sessions of the Eagers department and "Parajaat project" of Irfan-ul-Hidayah department were discussed in the house and important decisions were made.

In the end, Director Social Media department Ms. Jaweria Waheed gave her briefing to the house about the restructuring of the department and the job description of each member. The meeting was closed with the appreciation of each zone on their progress and achievements that were provided with guidelines for further improvements.