Right Reverend Bishop Tony Robinson, the chairman of Focus Pakistan and Archbishop of Canterbury, Church of England have said that Dr Tahir-ul-Qadri’s services for promotion of interfaith dialogue, harmony, tolerance, establishment of peace at global level and elimination of terrorism are praiseworthy. They said that Dr Qadri’s lectures and books had begun to alter stereotypical misperceptions and misunderstandings about Islam in the world. They said that they held Dr Tahir-ul-Qadri’s contributions for establishment of peace, educational services and welfare work in the high esteem, adding that his role as bridge builder among various cultures, civilizations and religions was historic. They said that they had good wishes for the people of Pakistan, further saying that they were working at different tiers for uplift of the backward regions of Pakistan.

Both faith leaders expressed these views in a meeting with Sohail Ahmad Raza, Director of MQI Interfaith Relations in Peace Centre Lahore the other day. Christian leader Dr James Chanan was also present at the occasion.

Bishop Tony Robinson and Archbishop of Canterbury further said that they appreciated the work of Directorate of Interfaith Relations of MQI in making this world a hub of peace and love and reducing class divisions from the society.

Sohail Ahmad Raza apprised the respected faith leaders about different aspects of relations between Muslim and Christian communities in Pakistan. He also highlighted the imperative of focusing on socio-cultural commonalities between the both great religions, promoting the culture of interfaith dialogue and religious tolerance through greater engagement. He also threw light on the role MQI was playing in bringing humanity closer on shared agenda of peace, harmony and love. He also briefed the faith leaders about the services of Dr Muhammad Tahir-ul-Qadri for promotion of education, enlightenment, love and peace and elimination of terrorism, extremism and avoiding the clash among civilizations.

Talking at the occasion, Dr James Chanan, Director of Peace Centre Pakistan, said that the non-Muslim communities living in Pakistan paid a glowing tribute to Dr Tahir-ul-Qadri for upholding the banner of rights of minorities and promoting interfaith harmony here. He said that all religious minorities enjoyed complete freedom in Pakistan, adding that some incidents did take place due to a handful of miscreants. He said that such elements did not belong to any religion. Rather they were enemies of the entire humanity. 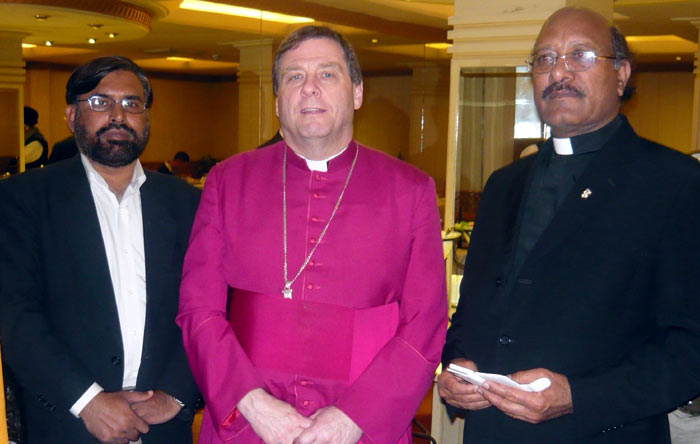