Pakistan Awami Tehreek leader Dr Muhammad Tahir-ul-Qadri has said that politics is again preparing to crush the state under its feet but added that the nation will not let it happen at all. He said that the people would neither allow politics to become Pharaoh not would they allow the state institutions to collapse. He said that he would announce the course of action for protection of the state on May 11. He asked the people to leave their homes on May 11 to get their constitutional rights, adding that it was futile to keep grieving over the sorry state of affairs. He said that none would confer rights on the people without their asking for them, further saying that they would have to snatch rights from the usurpers. He said that revolution required sacrifices. He further stated that a conspiracy was afoot to weaken the state institutions by placing the blame of a few incidents at their door-steps. 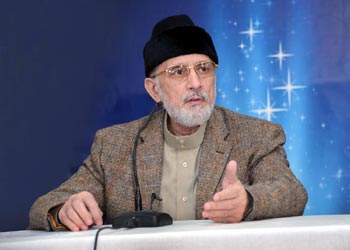 Dr Qadri said that a clear-cut and intentional anti-Pakistan script was being played. He asked the people to unearth such conspiracies and eliminate them with their collective power. He said that the unholy attempt to protect the terrorism would be foiled at every cost. He said that a lack of confidence was being shown in the defence institutions on dictates from the foreign masters. He said that a few hundreds of power-drunk families wanted to undermine the state, adding that they would have to be stopped from doing so.

The PAT leader stated that we would change the whole political system of the country and the people would be made participants in the decision-making. He said that we would bring about change through peaceful and democratic struggle by putting an end to corruption, and plunder of national resources in line with the provisions of the Constitution. He said that the people would get nothing from the elitist political system.

Dr Tahir-ul-Qadri said that some people were eating the dead bodies, while others were selling off their kidneys to make their both ends meet. He said that there was no government’s policy on display to eliminate hunger and grinding poverty. He said that millions of youth were without jobs despite having degrees. He said that corruption had become order of the day wherein even the smallest of work was not done in the government departments without the palms of the corrupt being greased. He bemoaned that justice had become extinct from society and the government failed miserably to protect the life, honour and property of the people. He said that the country was being pushed into the civil war. He further stated that the people would have to wake up from their slumber and take to the streets because the ruling elite were condemning to permanent slavery.