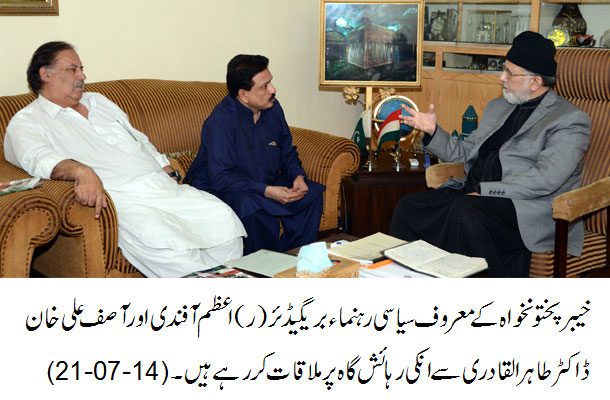 A high-ranking delegation of Pakhtoon Jirga Association led by its president Asif Ali Khan that included Hassan Khan, Jamal Khan and Brig. (r ) Azam Afandi called on PAT chief Dr Muhammad Tahir-ul-Qadri at his residence on July 21. Briefing the media after the meeting, Asif Ali Khan announced to join Pakistan Awami Tehreek and merge Pakhtoon Jirga Association into PAT. He said that after carrying out thorough investigation and deep thinking, they came to the conclusion that Dr Tahir-ul-Qadri was the only leader who was capable of bringing about revolution in the country. He assured Dr Qadri that the Pakhtoons would be supporting his movement and standing with him at every front. He said that everyone who came to power including ANP and MMA betrayed the Pakhtoons. He said that they voted for PTI in the last elections but the hopes they pinned on it had not be fulfilled so far. He said that Pakhtoon people were waiting for Dr Tahir-ul-Qadri’s call of revolution, adding that the moment the call would be given, the Pakhtoon would head for Islamabad.