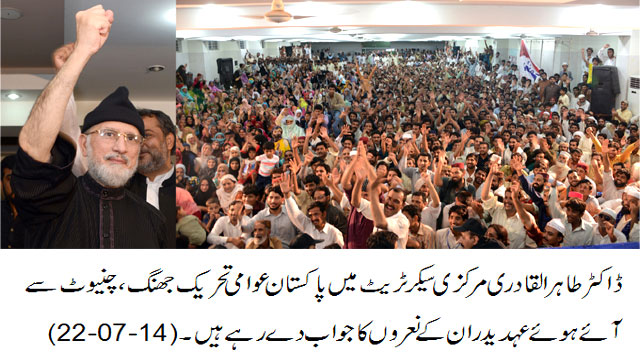 PAT leader Dr Muhammad Tahir-ul-Qadri has vowed not to allow rascals and hooligans to become a hurdle in the way of revolution. He said that time to send home the Pharaohs and Yazids of the time had come near, adding that Hitler and Mussolini, who violated the Constitution with abandon, would not be allowed to escape. He said that revolution will be followed by the establishment of real democracy and the people would be included in power. He said that mere electoral process could not be described as democracy. He stated that fair, free and transparent polls were held in real democracy but added in the same breath that bogus voting and pre- and post-poll rigging took place in the system presently in vogue in the country and that the electoral façade led to the worst ever democratic authoritarianism. He said that 180 million people had been getting neglected in this system.

Dr Tahir-ul-Qadri expressed these views while addressing thousands of PAT workers belonging to Jhang and Chinot as part of consultative meetings in the central secretariat on July 22. Dr Hassan Mohi-ud-Din Qadri, Dr Raheeq Ahmad Abbasi, Khurram Nawaz Gandapur, Sheikh Zahid Fayyaz and others were also present on the occasion.

Dr Qadri said that the so-called successive government that prided themselves on being called democratic always put local governments’ elections at the backburner. He said that the rulers threw the clear orders of the honorable Supreme Court about holding LG polls into dustbin, adding that they would be proceeded against under Article 6 for suspension of the Constitution after revolution. He said that people would be included in power after revolution according to Articles 32-A and 140 and basic democratic units consisting of 500 people at each level would be established in villages. He said that Rural Councils would be set up having devolved powers in various subjects such as health, education, police, local judiciary and agricultural markets and people would be enabled to improve standard of their lives by provision of opportunities at their doorstep.

Dr Tahir-ul-Qadri said that democratic structure to be built in urban areas would be known by the name of wards, adding that Ward Councils would represent 50,000 people and Urban City Council would head 20 Ward Councils that would have a member of 20-30 people. He said that one City Council would represent one hundred thousand people having the powers of such subjects as health, education, police, and local judiciary etc.

Dr Qadri made it clear that 180 million people were in need of revolution for establishment of real democracy in the country and warned that if anyone tried to hamper the march of revolution, he/she would be swept away in its powerful tide. He said that rotten, exploitative, feudalistic and capitalistic system was in vogue in its worst form in the country for last many decades but said that this system would be sent packing for good in a few weeks’ time.