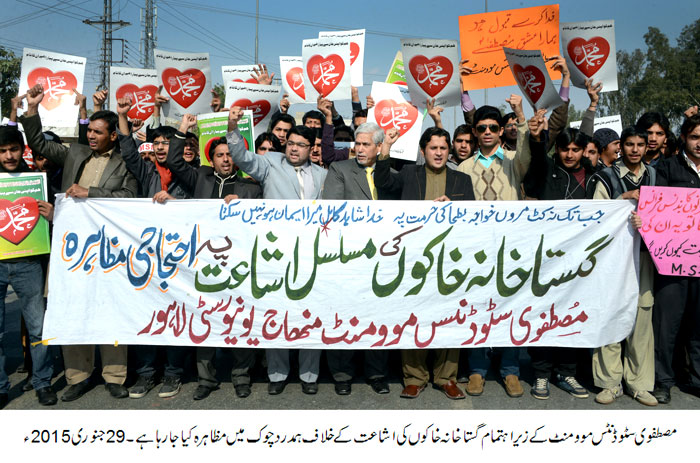 Chaudhry Irfan Yousaf presented a five-point declaration on behalf of PAT and MQI on the occasion.

Addressing the participants of the demonstration, MSM President Chaudhry Irfan Yousaf said that the concept of freedom of expression is not absolute and there are certain limitations to this right. He said that one’s freedom ends when one encroaches on freedom of others. He said that on the one hand, efforts are being made for establishment of global peace on durable basis and conspiracies are being hatched posing challenges to the peace on the other through such heinous acts. He said that the act of publication of caricatures has hurt the feelings of billion plus Muslims around the world and sent a wave of concern across the whole of civilized world.

The MSM President said that blasphemy of holy personages is a form of terrorism and no religion can support such act. He said that there is a need to move beyond expression of condemnation and take practical steps to stem such reprehensible actions. He said that the world has become a global village, adding that a heavy responsibility rests on the government of France to bring all involved in this heinous crime to justice and mete out exemplary punishment to them in the interest of global peace and harmony.