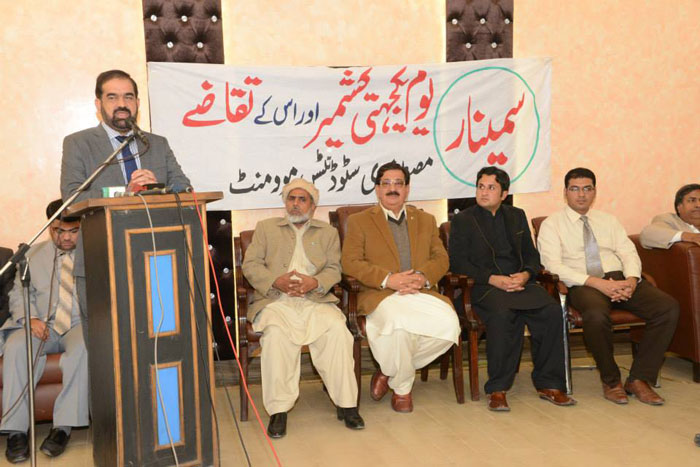 Addressing a seminar held under the banner of PAT to mark the Kashmir Solidarity Day on February, central PAT President Dr Raheeq Ahmad Abbasi said that real democratic and popular government believing in justice can play an instrumental role in getting the age-old Kashmir issue resolved. He said that we cannot move forward without understanding the new realities at regional and global levels and becoming well conversant with them. He said that private Jihad created problems for indigenous people-driven movement for freedom, adding that the fact that the Kashmir issue has gone on the backburner of the world community represents failure of Pakistan’s foreign policy.

The PAT President said that Prime Minister Nawaz Sharif did not go to Azad Jammu and Kashmir to express solidarity with the people. Rather he went there to reorganize the local PML-N chapter. He said that while being there, he announced the construction of a road, adding that solution of every national problem in the eyes of the Sharif brothers is construction of motorways and metro bus services.

While addressing the participants of the seminar, PAT Secretary General Khurram Nawaz Gandapur said that struggle for freedom of Kashmir is basically the movement for completion of unfinished agenda that has been hanging fire since the partition of sub-continent. He said that solution of the Kashmir issue is inevitable for both countries to have normal bilateral relations. He said that PAT chief Dr Tahir-ul-Qadri has always emphasized the fact that Kashmir issue will not be solved through rabble-rousing, emotional sloganeering or protest demonstrations. Rather strong legal position will have to be taken at international level for this purpose. He said that this presupposes honest and courageous leadership and a really representative government to bring the Kashmir issue back to international agenda.

The PAT Secretary General said that the rulers always remember Kashmir issue when India spurns their unilateral offers for friendship. He said that there is no better and more suitable leader available in Pakistan than Dr Tahir-ul-Qadri to plead the Kashmir case cogently and forcefully.

Mustafa Rasheed, Chairman of Pasban, said in his speech that it is important to send the present corrupt government home for liberation of the Kashmir issue. He said that Kashmir is jugular vein of Pakistan and we would not rest till we get it freed. Shoiab Tahir said that Pakistan is fighting a war for elimination of terrorism and extremism and all regional countries including India should not throw spanners in its works. He asked the regional countries to play their role for peace.