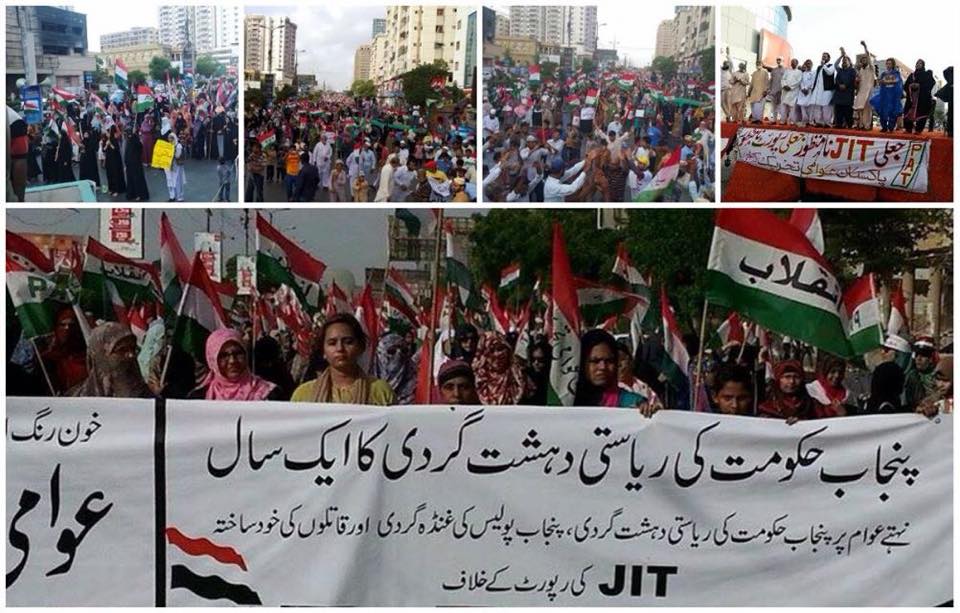 PAT chief Dr Muhammad Tahir-ul-Qadri has said that the killers have known through mass protest rallies that the nation has not forgotten the Model Town tragedy and that it will not rest till it gets justice for the martyrs and the injured. He thanked the workers, civil society activists, and political parties on taking full part in the protest rallies, which were taken out in Islamabad, Sakhar, Abbotabad, Ghotki, Hyderabad, Larkana, Quetta, and Sibbi.

Dr Qadri said that howsoever powerful, cunning and wealthy the killers of Model Town victims may be but they will have to account for their crimes in this world. Deaf, dumb and insensitive system is not listening to aspirations of the oppressed. The recorded message of Dr Tahir-ul-Qadri was played in all the rallies.

Speaking on the occasion, Dr Raheeq Abbasi said that we have one slogan only, which is ‘give us justice or kill us too.’ He said that as long as we are alive, we will continue to demand justice for the Model Town victims. He thanked the leaderships of PTI, Jamat-i-Islami, Majlis-e-Wahdat-tul-Muslimeen, Sunni Tehreek, Alla Pakistan Muslim League and Jamiat Ulema-e-Pakistan for taking part in the protest rally.

Addressing the rally, Khurram Nawaz Gandapur said that the PM and the Punjab CM are involved in Model Town tragedy and the irrefutable claims of their involvement are present in the form of media footage and the blood of innocent people.

Expressing his views on the occasion, Sheikh Zahid Fayyaz said that one year is going to be completed since the Model town tragedy took place. He said we want to know as to what the peace loving workers of Dr Tahir-ul-Qadri had done to deserve the bullets of police and why has no justice been dispensed to 14 martyrs and 85 injured despite passage of one year?

Another rally that was taken out in Quetta was led by Dr Ishtiaq Hussain Baloch. Addressing the rally, he said that the biggest reason of lawlessness in the restive province of Balochistan is the oppressive and exploitative attitude of the rulers. He said that when the rulers do not dispense justice, then the people are left with no option but to climb up the mountains. He said that a great cruelty was committed in Model Town and asked the institutions responsible for dispensation of justice to break their silence.

Muhammad Bilal Khan, Muhammad Shahzad Qureshi, and Saifullah Qadri led the protest rallies in DI Khan, Hyderabad and Sakhar respectively. Addressing the participants of these demonstrations, the leader said that when Dr Tahir-ul-Qadri started waging a struggle for rights of the people, the state terrorism was committed on his workers.