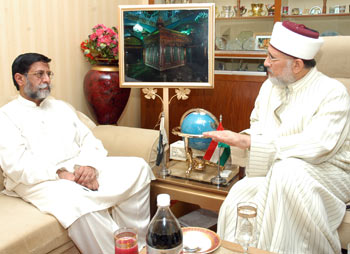 Chairman Senate Muhammad Mian Soomro paid a cordial visit to the founder and Patron in chief MQI & Chairman Pakistan Awami Tehreek Shaykh-ul-Islam Dr Muhammad Tahir ul Qadri at the latter’s residence on 26 June 2008, and discussed matters of mutual interests. The meeting continued for over an hour. The Chairman Senate felicitated him on the marriage of Sahibzada Hussain Mohi ud Din and extended his congratulations and good wishes. Expressing his inability to attend the marriage ceremony on 28 June 2008 owing to his tour abroad, he said he paid special visit to Shaykh-ul-Islam to extend his felicitation in anticipation.

Paying great tribute to Shaykh-ul-Islam for his valuable services with regard to his religious, social and educational services and commendable performance as the ambassador of peace. The chairman senate said: "Dr Tahir ul Qadri has contributed his immense and historical services towards establishing relevance of Islam to modern life, renaissance of Islam and its modernization and reformation of the Muslim Umma." He further added that "Dr Qadri is vehemently continuing his struggle to establish Islam as religion of peace through his preaching and practical example." In an hour’s meeting both the leaders discussed current issues. and the Muslim world are facing and explored possibilities to control the scenario. On the occasion were also present Dr Raheeq Ahmad Abbasi Nazm e Aala MQI, G.M.Malik Principal Secretary to Chairman PAT and MQI, Mian Mumtaz and Mian Zahid Islam. 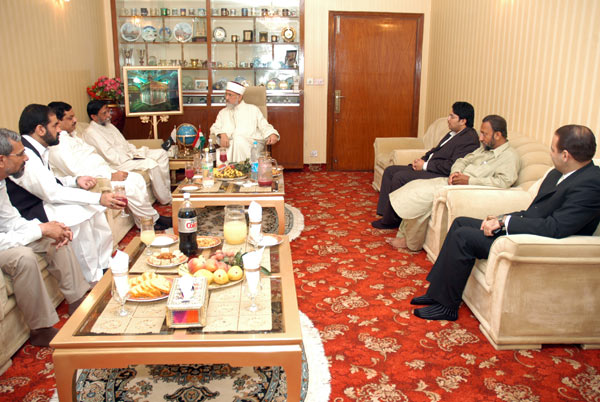