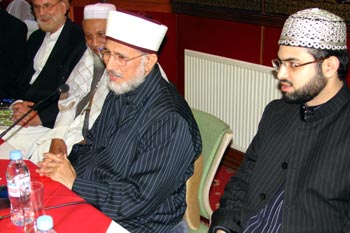 Workers and members of the London branch of the Minhaj-ul-Quran organisation to receive achievement awards included: Asif Shakoor – Media Secretary and Faiza Qadri – graduate of al-Minhaj University received the Dr Tahir-ul-Qadri award – an award in the name of the organisations founder and patron in chief.

Faiza Qadri said: I humbly presented the award to my mother in law for supporting my family whilst I made tours to deliver lectures at conferences and seminars. Whilst Asif Shakoor celebrated a huge collection of local press coverages, over 1,000 images of Shaykh al-Islam Dr Tahir-ul-Qadri and over several thousand images of functions and events during a span of five years since his designation as media secretary. 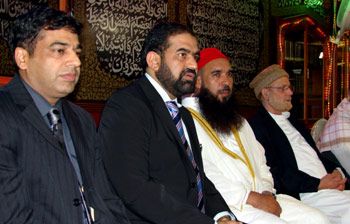 Zareeda Shafiq, Nasima Akhtar and al-Haj Muzaffar Ali were awarded with a Minhaj al-Qur’an award each. Life time membership certificates were presented for those who have passed away as a continuous charitable act. Shaykh al-Islam Dr Tahir-ul-Qadri placed these on his chest for blessings prior to distribution.

Profound scholar Shaykh al-Islam Dr Tahir-ul-Qadri in his discourse interjected the importance of becoming a member of Minhaj al-Qur’an al-`Alamiyya. Dr Qadri said: “Being a “rafiq” – friend or member of the organisation will be useful in the afterlife”. The word “rafiq” is said to be derived by the learned scholar from a verse of the Qur’an “wa Hasuna ula’ika rafiqa” – and they are the best of companions.

Inspite of having blood pressure problems throughout the day, the versatile scholar Dr Qadri choose to offer some words of al-nasiha - advice for the gathered. He said: “I will explain the meaning of the word sha`ban since this is the month of Sha`ban. The root of the word “sha`ban” is “sheen”, “ayn” and “baa”. From this, you get ash-sha`b, which means “branch” and it’s plural is “shu`ab” – branches. It is this very word which is used in Imam Bayhaqi’s book, “Shu`ab al-Iman” which means, “Branches of Faith”. Similarly, in Urdu, we find the word “sho`ba” which is used for department (branch).

Ash-shu`ab is a word which has two opposing and contradictory meanings. In grammar, this is known as being from Bab al-Azdad. In all the mother books of grammar, its states that “sha-`a-ba” means both branching/distributing (al-tafriq) and combining (al-jama`a) – i.e. two opposite and contradictory meanings. On the weight of “fa`lan” – so and so, it becomes “sha`ban”. So why is this month know as such? Shaykh al-Islam Dr Tahir-ul-Qadri told listeners: “In this month, Allah has gathered overwhelming blessings. More than any other month excluding Ramadan. Then in the middle night of the month, these blessings are branched out for distribution. This is why it is known as Sha`ban, because blessings are gathered together during the month and distributed in one night.” 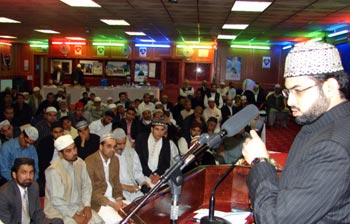 Founder and Patron in chief of Minhaj-ul-Quran organisation, Dr Muhmmad Tahir-ul-Qadri told listeners: To have khawf – fear of Allah, al- Raja` - hope of forgiveness from Allah, `amal al-saliha - obedience and good deeds, something to distribute to others. If you collect nothing of this nature you cannot expect to be able to give anything either. So prior to giving others al-nasiha - advice, obtain good deeds yourself by living a pious life. Allah said: in Sura al-`Asr – chapter of help: “By the time, verily, mankind is in loss except those who believe, perform salihat.”Allah used the plural “salihat” that many righteous acts need to be gathered. It is after calling the believer to gather good deeds that Allah declares: And recommend one another to al-haq – the truth and recommend to al-sabr - patience.

In the synopsis of his speech Dr Qadri said: “The way to attain patience is to face difficulties. Otherwise, what is there to have patience with? No one can become a “al-saabir” – patient person if they have not faced trials, tribulations and difficulties.”

Competing with another Islam had been permitted when obtaining good deeds, Dr Qadri said: “ Whoever does not gather good deeds and attempted to advise others, is simply committing al-riya – aggrandizement”, considered a sin in Islam . As for the individual collating a lot but failure to pass them onto others, he is stingy. Dr Qadri said: “So my advice is for you to gather good deeds and when you have amounted sufficiently, then also distribute them.” 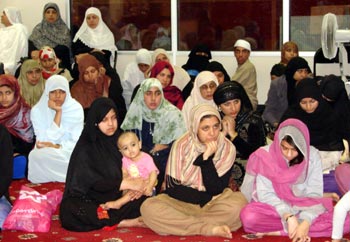 Learned PhD student of Islam’s renowned Jamia al-Azhar - academic institution of learning in Cairo, Egypt, Shaykh Hasan Muhiyy al-Din al-Qadri told listeners: “This verse sums up the subject matter of this Book – the Quran. The companions of the noble Propher are mentioned in this verse and they reached this status (of being mentioned) due to their link with the Prophet (s). In introducing them, Allah Almighty first mentions the Prophet (s) to show that without loving him, the rank of al- sahabi- companion cannot be achieved. Once this personality is understood, the purpose of his mission can then be recognised. Their lives become a reflection of that “Muhammad” whose name was mentioned before theirs in this verse. This is as a result of their closeness to him (s). They became absorbed in his nearest al-qurba in the areas: al-muhabbah (love), al-ita`at (obedience) and al-khidma (service).”

Chairman of the Supreme Council of Minhaj-ul-Quran, Pakistan, Shaykh Hasan also said the faith of the companions of the Prophet (s) was such that whatever they heard from the Prophet (s) they accepted and acted upon it - aamannaa wa sadaqna. When they were asked to make al-hijra, they left their families and jobs without asking questions to migrate from al-Makka to al-Madina. He explained the successors of the companions of the Prophet are known as mujaddids - revivers.

Director of Minhaj-ul-Quran International, Dr Raheeq Ahmad al-Abbasi said: “We have gathered here today not because of business, family links, understanding the same language or tribalism but rather it is out of the love of Allah Almighty and His Messenger [peace be upon him]. Also due to the love of our Din – way of life, In fact, our hearts did not know of this love nor was it strongly imbedded in our heart until we heard of Shaykh al-Islam Dr Muhammad Tahir-ul-Qadri speaking and words inculcated this into our breasts.” 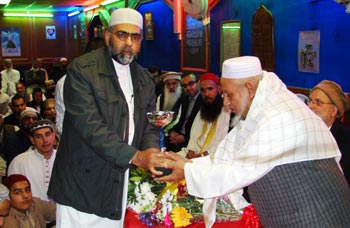 Stopping over from a tour of Europe and Asia, Dr Al-Abbasi told listeners: “The Prophet (s) informed his nation that there would be al-mujaddids - revivers of the religion appearing every hundred years. The aim of the mujaddid or reformer was to guide humankind on the right path. It is indeed a great blessing of our Creator and Cherisher that He has bestowed someone who is both a mujaddid and a ghawth - arch-helper from amongst the saints. We should be thankful to Allah – God for this al-Ni`mah - blessing and not assume that it will be with us forever. Serving the Shaykh – our mentor is itself a al-ni`mah - blessing upon us and we should offer our utmost thanks for this.”

Special envoy of Dr Tahir al- Qadri, Dr Raheeq Ahmad al-Abbasi said: Shaykh al-Islam Muhammad Tahir-ul-Qadri only demands two things from us: That we become how he wants us to be and to invite others to this path of good by spreading his lectures and literature. In a series of advices Dr Al-Abbassi said: “We have become slack on this second point. My final advice to you is for us to become active in this field”

Shaykh Sadiq Qureshi of Minhaj-ul-Quran London branch encouraged the audience to subscribe to QTV in order to establish al-suhba – a spiritual companionship with Shaykh al-Islam Dr Tahir-ul-Qadri. The recently broadcasted powerful set of lectures on the authoritativeness of the sunnah - hujjiyya al-sunnah played a crucial role in silencing the deniers of the prophetic traditions – sunnah wa al-hadith literature.

Imam of Minhaj-ul-Quran centre in London, UK, Shaykh Sadiq Qureshi refreshed everyone with a miraculous event of Shaykh al-Islam Tahir-ul-Qadri in Chakwal, Pakistan. He said that some people envious to Shaykh al-Islam disturbed some bee hives during his lecture, causing them to swarm. The bees gathered above the crows and slowly descended towards them. The audience didn’t move but were indeed worried. Shaykh Qureshi explained: the bees were six feet above the ground when Shaykh al-Islam said: “They had no shame for their action (releasing the bees). At present all I can do is ask you to keep our respect.” Upon saying this, the bees suddenly responded by dispersing.

Workers convention held at the UK head office of the organisation was also attended by Shaykh al-Hadith of Bangladesh, Shaykh Habib al-Rahman, acclaimed to be the teacher of thousands of scholars and said to be an extremely pious person.