#MWL has been addressing and focusing on all the age groups and has also catered to the needs of women from all walks of life. Its expansion across the borders has spread its message very effectively to a wider audience. Many congratulations upon there #Celebrating33yearsOfMWL.

While extending his heartiest congratulations on the 33rd foundation day of Minhaj-ul-Quran Women League, President MQI Dr Hussain Mohi-ud-Din Qadri has said that MWL has emerged as an effective platform for moral and spiritual training and education of women across the country. He said that MWL's struggle over the past three decades has been characterized by devotion, hard work and absolute commitment to the vision of Shaykh-ul-Islam Dr Muhammad Tahir-ul-Qadri. He said that MWL has been at the forefront of efforts to raise awareness at different levels in society.

Dr Hussain Mohi-ud-Din Qadri said that the women associated with the MWL family have proven through their example that womenfolk are capable of transforming Pakistan and that the dream of a peaceful, prosperous and harmonious society can be realised provided women are enabled to play their due role.

President MQI said that MWL leaders and workers not only performed their household responsibilities but also worked hard to spread the message of peace, love, and women's rights and for this purpose, they traveled far and wide across the country and held seminars, spiritual gatherings, walks and workshops for awareness. He said that MWL has made Shaykh-ul-Islam proud through their tireless struggle. He hoped that they would continue working hard with the same zeal and zest in pursuit of the organizational objectives. 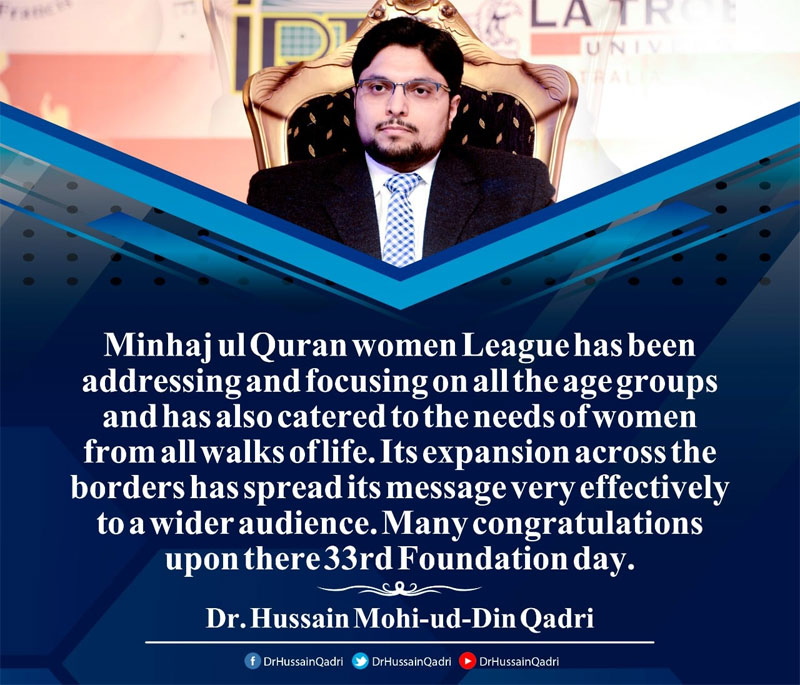