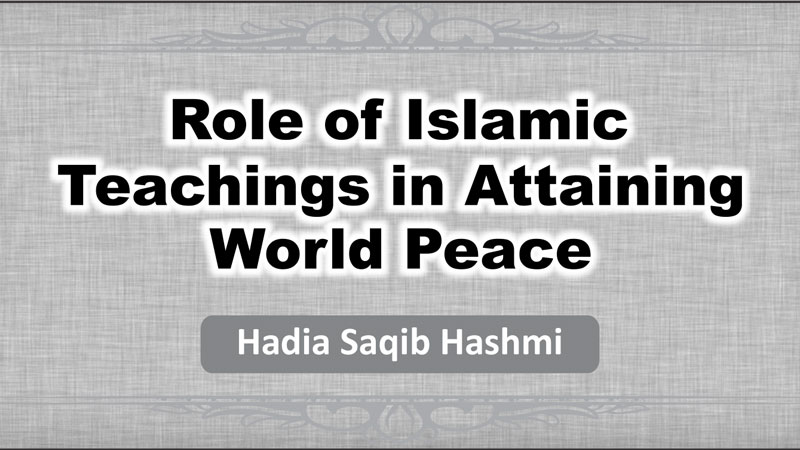 The pre-Islamic Arab society was known for extremism, injustice, tribal arrogance, social and moral evils. It was a time when humanity used to be degraded and dishonored. The Roman civilization can be found at that time along with Greek, Persian and Hindi civilizations but these societies were unaware of the meanings of human values, culture and morality. In these circumstances, the Holy Prophet (SAW) was sent with Divine message and He introduced those principles of civilization, morality and tolerance whose source was the Holy Qur'an and Sunna, the touchstone of its authenticity was his own ideal conduct.

In a world where wars have taken over every corner, it feels as though we need peace now more than ever before. With certain countries on the brink of nuclear wars that could potentially change the face of the Earth, we all need to understand the importance of peacekeeping. Allah (SWT) says in the Holy Quran:

"And if they incline toward peace, then you too incline toward it, and put your trust in Allah. Indeed He is the All-hearing, the All-knowing."( Surah Al-Anfal, 8: 61)

Holy Prophet (SAW) said while delivering his address to people after conquest of Makkah:

The so-called champions of modern-day world have come to know the meanings of extremism today but 15 centuries ago, while founding new civilization, the Holy Prophet (SAW) eliminated terrorism, extremism and sectarianism by urging his companions to behave nicely with their neighbours with benevolence. The Companions were so led to feel by his insistence on this command as if the Holy Prophet (SAW) eradicated the difference between Muslim and non-Muslim as a human being and neighbour.

"O people, spread peace, feed the hungry, and pray at night when people are sleeping and you will enter Paradise in peace."( Sunan Ibn Majah, no. 3251)

The Holy Prophet (SAW) has said:

"Shall I inform you of something that holds a higher status than fasting, praying and giving charity? Making peace between people, for verily sowing dissension between people is indeed calamitous."( Kenzul Ummal, no. 5480)

The instructions about prayer, Zakat and fasting came later on but teachings about individual and familial brotherhood and ideal code of conduct were put into practice first. The Holy Prophet (SAW) gave a special instruction to establish a charity for the poor, talk to them tenderly and not hurt their feelings. The Holy Prophet (SAW) emphasized on his followers to worship their Lord, feed those of the needy whom they knew and also those whom they did not know.

No hurting actions and words for each other:

The Holy Prophet (SAW) has himself described a Muslim as someone by whose hands and tongue other Muslims are not hurt and remain safe. Leave alone unjustly killing anyone, a person using foul and immoral language against others could not be called a Muslim.

The Holy Prophet (SAW) has said:

"Avoid cruelty and injustice, and guard yourselves against miserliness, for this has ruined nations who lived before you." (Riyadh-us-Salaheen, no. 203)

Narrated 'Aisha (may Allah be pleased with her):

The Holy Prophet (SAW) said, "The most hated person in the sight of Allah is the most quarrelsome person."( Sahih Bukhari, no. 50)

On the authority of Abu Huraira (peace and blessings of Allah be upon him), reported: The Messenger of Allah, (SAW), said,