Jhang Election: A Message to All Minhaj-ul-Quran Sisters 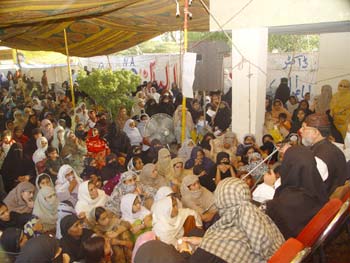 As many of you are aware, a bi-election is taking place in Jhang, Pakistan and Hassan Mohiuddin Sahib is contesting it on behalf of Pakistan Awami Thereek. As part of the election campaign, along with the brothers, members of Minhaj-ul-Quran Womens League from throughout Pakistan, Minhajians who have graduated from the Girls Shariah College as well as current students are all working night and day during the election campaign. This is a very tough job for a man let alone for women to take part in. The election campaign consists of leaving their accommodation at around 8am every morning and going door to door, giving the message of Minhaj-ul-Quran and PAT and motivating people to vote for our manifesto. In one day the women can cover up to two hundred houses, being split into groups and walking on foot under the blazing hot sun, with no rest. Most of them return to their beds late in the evening and begin the same routine the next day. At the same time the sisters organise many Mehfils and speeches throughout the city in every street corner, trying to get across the message of our Quaid, Dr. Tahir-ul-Qadri to the masses. This is probably the most toughest campaign any of the sisters will ever have to engage in but they are all determined Insh`Allah to gain success.

The Jhang election campaign is just one step towards our overall aim of establishing Mustafvi Inqilab in Pakistan, to revolutionize this society, to help the poor and needy and to give back the rights of the suppressed and subjugated nation that our beloved Prophet (saw) gave to us 1400 years ago. Working in Jhang for the last month has been a revelation for many of us and as members of Minhaj-ul-Quran and Pakistan Awami Thereek it has made us all more determined to fight for the rights of the poor in this country and to alleviate their hardships, which can only be done if Islam is established as a practical and working force in this country under the leadership of Qibla Quaidi Mutharram.

Poverty is on of the biggest problems in this country and something one should never have to face or even encounter. If one wants to see bravery at is best in Pakistan then a mother of eight children, whose husband lies disabled in bed after a fall from a building site where he worked an 18 hour shift for a few rupees a day should be given a medal of honour. She is a woman in Jhang who cleans the houses of six different people, washing their dishes, dusting, moping, and every other chore one can think of, as well as suffering daily abuse from her masters for just taking a second to breathe, humiliated by the children of her masters who order her like a slave, demanding their every unreasonable whim be met. 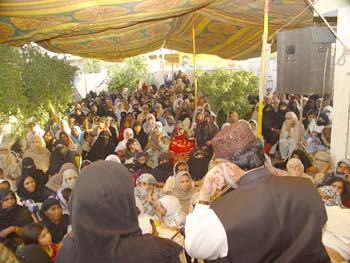 Yet this mother suffers in silence, knowing that this is her fate. To argue and fight and respond is a useless and damaging affair since it will mean she will lose her job and thus her livelihood. No income literally means no food on the table. So she accepts the insults as part of her fate, keeps her head down, even if violence ensues knows that there is no recourse but to accept her destiny.

Although this is the story of one woman in Jhang it is unfortunately the tale of millions of women all across the world Muslim or non-Muslim. That is why nothing short of a revolution will suffice. What is revolution? A drastic change, a complete overhauling of the prevailing system so that equality and justice can prevail.

However when one lives in a life of luxury, either in Pakistan or any other country, it can be difficult to talk of drastic change and discuss the need for implementing Islam not only as a social and moral code but as a political force too. Indeed engaging in more regular Islamic Dawah work can itself be an uphill struggle, finding the time either to convey the beauty of Islam or listen to someone talk about Islam. Yet by working in Jhang has shown to me our own short fallings, lack of patience and courage, stamina and bravery. Money, luxury and prestige has made us lose sight of our actual aim in this life. Money is not a bad thing, but when it dulls the senses it can be a dangerous force.

Whilst working in Jhang I wondered how to do Dawah work in areas such as these? To canvass for votes meant first explaining the aims of Minhaj-ul-Quran, what we stand for and hope to achieve and to convince them to participate in the forthcoming election. I was expecting doors to be shut, people to respond angrily but the opposite occurred. Families did not respond with hostility and say we only have three chappatis between six of us and no meat or vegetables to eat with it, just water or a little stale youghurt so please take your preaching elsewhere!. Instead they smiled politely, invited us in, dusted down their most elegant chair (which has three legs and is kept stable by a rope and peg fixed onto the wall) and asked us to sit down. They crowded around us on the floor and looked eagerly at us, wanting to hear what we had to say. When they heard the Qura being recited their eyes lit up and they nodded their heads in acceptance when the translation was read. Allah is Great and His Messenger is our beloved they said. Tears came to their eyes as they heard stories of the Holy Prophet (saw), his commands and the trials and tribulation he encountered in his life. Alhumduiliah, they said, we give shukr, thanks to Allah for all that we have and pray Allah helps every one. 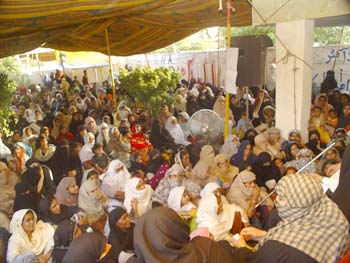 I look to see what material things they have and see nothing. A broken bed made of old wood and a small cradle made of material hangs from two of its legs. A broken stool is used as makeshift table, a small blackened stove with one pot that cooks everything stands in the corner and a few chipped dishes from which to eat are stacked neatly on the floor. But still they thank Allah Taala for what they have, a roof over their head and a source of income, meagre though it is. However, I feel ultimately they thank Allah for their Imaan for that is all that they really have. They know that if they have their Imaan, then justice will be done. If they have their Imaan then no matter what, no matter the time it takes, Allah will be most Merciful and give to those who were not given to by man and take from man what he was given in excess. If justice does not prevail in this life the poor know that it will prevail in the next life.

This is the warning that we should all heed. Justice will indeed prevail. Leaving these houses I was so humbled. Their patience and respect, their faith in Allah and their gratefulness for what they had. Doing dawah work here, where I thought would be the most hardest was the most easiest. The place where one would expect more complaints and criticism, I received none. Just words of thanks from them for coming to them, for accepting their hospitality and making the effort to talk to them in a civil and human way. Is this what humanity has come to? Those people who are poor, ill treated and suffer untold injustices and cruelty still respond beautifully whilst those of us who live in magnificent houses, have money in excess and a beautiful future ahead of us still complain. A future that is safe and bright, a future where we have time and money for walks, leisure or breaks and can afford to be ill or suffer depression but despite this luxury we are still rude and not content. As Muslims it is our duty not only to believe in Allah and His Messenger (pbuh) but to practically implement it in our own lives and encourage others to do likewise. Yet most of us shy away from any form of Dawah work, respond in a hostile way to those who do take up this responsibility or criticise their every move.

Some of my fellow sisters who are working in the Jhang election also come from poor backgrounds and have families who have a very small income. However despite this they are still motivated to bring change. They believe that no matter what, Islam must and will prevail and they are determined to do what ever they can in the struggle for it. I have been inspired by the efforts and determination of our workers who are willing to sacrifice a great deal for this worthy Mission, Minhaj-ul-Quran, the Mission of Allah and His Rasool (pbuh). Moreover the response from those who are in most need and live in desperate conditions has been truly uplifting and I pray to Allah Almighty that those of us who are more fortunate, especially those of us who belong to and work for Minhaj-ul-Quran and PAT, should have the tawfeeq to learn from those who are less fortunate but aspire to the heights of true greatness in the eyes of Allah Almighy.