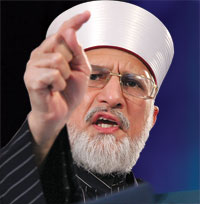 Pakistan Awami Tehreek leader Dr Muhammad Tahir-ul-Qadri has strongly condemned the attack on team of Express News. He said that this attack was an attempt to gag media and muzzle its independent voice. He said that such cowardly acts could not deter media from doing its duty.

Dr Qadri said that media had emerged as the fourth pillar of the state and was playing its role of dissemination of news very effectively. He asked the federal and provincial governments to bring the attackers to justice, adding that those in power had no right to be there if they failed to ensure independence of media. He said that Express News was promoting positive values in the society. He said that PAT stood by Express News in its struggle.