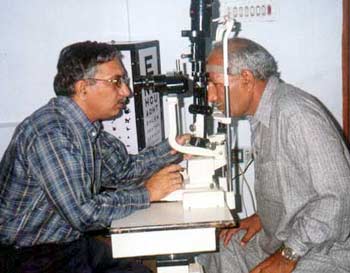 7th Minhaj ul Qur`an welfare society Narowal eye surgery camp started on 11th of September 2004.  Free eye OPD camps were set up at 18 different places of the whole distt. These camps are set up far and far from where its very hard for the dependent, old and the poor people to come to hospitals for their treatment. These people are suffering from this eye disease for a long. Minhaj ul Qur`an welfare society Narowal provides thousands of masses the facility of free eye treatment door to door. It is advertised the holding of the camps of OPD and the schedule of free eye surgery camp through the medium of pamphlets through out the distt. Hence the society sets up OPD camp under the supervision of eye specialist doctors. Where helpless and the poor people are checked. Most of them are given the medicines and eye drops after their check up. Where as many people are selected for their eye surgery and they are given the date for free surgery of their eyes. This year almost 3000 eye patients have been checked at 18 different places in the country side of Narowal. Out of which, 500 people  were called for surgery.

This year Minhaj ul Qur`an free eye camp was held from 6th of October to 8th of October. And the arrangements were made for surgery camp by Minhaj ul Qur`an Islamic Centre Narowal  as usual. The well trained workers of Minhaj ul Qur`an Tehsil Narowal arrived on 4th of October at Islamic Centre for their voluntary services. An operation theater was made in the big hall for surgery where the latest appliances for surgery, with the cooperation of Me hospital Lahore as well as some other private hospitals, were available. Control room, operation room, biometry room (where lens are taken out by computer), men ward, women ward, doctors room and paramedical staff room were managed. Electricity committee, water supply committee, security committee and reception committee had made all arrangements by the morning of 5th of October. Women ward was laid down on the roof of Islamic Centre with the help of tents. Where the lady workers of Minhaj ul Qur`an Women League were serving the patients along with the medical staff of women. 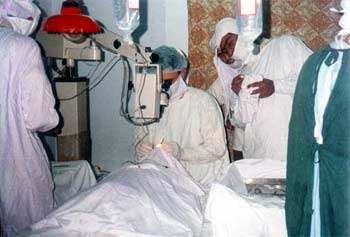 On Wednesday, 6th of October, free eye surgery camp was inaugurated as programmed. A well fascinating ceremony on the right side of main gate of Minhaj ul Qur`an Islamic Centre  was started with the  recitation of the Holy Qur`an and Naat Shareef . Where the team of board of doctors of eye specialist of Me hospital was present too. Besides eye patients who were given the date for their eye surgery, there were also many other men and women arrived from the different part of the distt  in that ceremony. In this inaugurating ceremony besides DCO of Distt Narowal, Mr. Sheikh Muhammad Asif, the central director of Minhaj ul Qur`an Welfare Society, Conl (R) Muhammad Ahamd and deputy director  Mr. Sajid Mehmood Bhatti (who especially arrived from Lahre), well known eye specialist Me hospital and camp in charge respected Dr. Amanat Ali sahib, camp administrator Nazim Minhaj ul Qur`an Haji Ismaeel chaudhry, chief coordinator camp Hafiz Abdul Huyy, the leader of Pakistan Awami Tehreek Khan Abdul Qayyoom Khan, Haji Nazir Ahmad and Nazim Union Council and leader Tehreek Minhaj ul Qur`an Allama Abdul-r-Razzaq, many other well known personalities participated too.

DCO Narowal Mr. Sheikh Asif said to the people while delivering his speech, `I am fluky that Minhaj ul Qur`an has arranged Free eye camp under my supervision. He admired the arrangements made for camp and assured to cooperate to his level best. Coln (R) Muhammad Ahmad and Mr. Sajid Mehmood Bhatti who were in the camp from Markaz  said in their speeches that Minhaj ul Qur`an Welfare Society which is working under the guidance of Pro. Dr. Muhammad Tahir ul Qadri, has seized a great obligation to serve the deserved and forsaken people and working dawn to dusk for the sake of this noble chore. Minhaj ul Qur`an Welfare Society is living sample of this work. And the entire possible cooperation will be carried on for eye camp by central welfare society, they added. Dr. Amanat Ali said, this congregation is actually the congregation of patients who have been called for surgery. He said that under the supervision of Pro. Dr. Imran Akram Sahaf Incharge eye unit-2 Me hospital 10 eye specialists will be giving their services to this free eye surgery camp (being held 6th of October to 8th of October) on different occasions. The operations of people`s eyes are being done for 6 years, he added. And they also followed up after their operations. In the last moment of the ceremony, the chief guest, Conl (R) Muhammad Ahmad inaugurated the operation theater and prayed for the success of the camp. 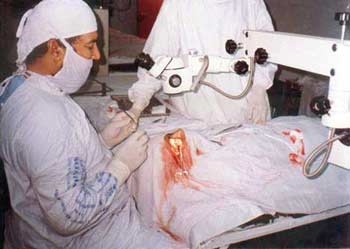 Then the camp started its work. The receptionists delivered the cards of operation to the all patients. A committee consisting of Pro. Arshad Naqashbandi, Mirza Asif Baig and respected Mangta Tahir was formed for the inquiry about the deserved patients.  Its duty was to point out the justified and vindicated patients after inquiry and checking the documents so that limited supply can be reached to the deserved ones. The whole patients who were cleared by that committee, were altogether free checked by the doctors. From other patients and of middle standard people, only 2000/- rupees for putting lens and 200/- rupees for simple operation were taken. Keep in mind that in usually in all hospitals 7000/- to 20000/- rupees for putting lens and 3000/- to 6000/- rupees are being taken. 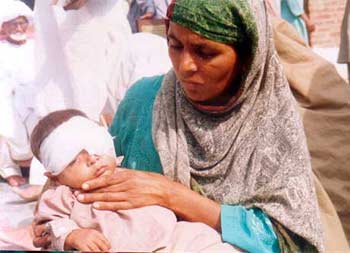 In the ward there were supply of medicines for cough, fever, constipation, itching, allergy, cold, catarrh and rheum which were given to the patients at hour of need. Here in the camp, the patients are fully cared from cough so that he may not cough because it can affect on eyes. In the morning, at 8 O` clock, the workers of Minhaj ul Qur`an Welfare Society were working with such enthusiasm that there was neither any sign of sleep in theirs eyes nor any fatigue till 3am at night. In spite of insisting them to take some rest, they were not even ready to have a nip of sleep and were absorbed in their work. they were repeatedly asked as they had  to do their duties in the morning as well.

On the second day of the camp, Thursday,7th of October, at 10 O` clock, the all patients who were given the time for operation had arrived in the camp from the farthest areas of the countryside. They were well entertained and issued the cards as per rules and regulations of the camp. That day OPD was also done. In which at the spot, the patients were given eyes drops and selected for the operation. So, thus the day started with a great zeal and passion. At 12 O` clock Pro. Dr. Imran Akram Head Office eye unit-2 Me hospital Lahore came to visit the surgery camp. The team sent by Me hospital and managing committee welcomed them. After staying in doctors room for a short time they visited the whole camp and checked all the patients whose eyes were operated last day. They also checked the eyes of those patients who were going to be operated that day (7th of October). The operation theater also had started its work till that time. Then Pro. Dr. Imran Akram kept on operating with his team till sunset. He appreciated the arrangements regarding the camp and showed his contentment. And returned back at the time of sunset. And that, the surgery of 93 patients was done that remained till 2 O`clock at night and the workers had been working very actively. 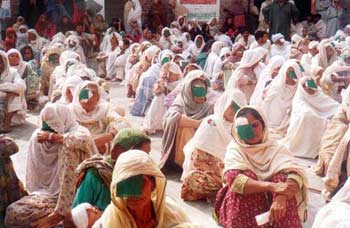 On the third day of the camp, 8th of  October all the patients who had been given the time for that day had arrived in the morning for operation. There was doctors` round and from 10:00a.m to 1:00p.m all the patients who had been operated last two days were checked. After Jum`a prayer, at 2:30p.m the operations were started. Almost at 3:00p.m well-known and highly esteemed personality Atomic Scientist and Nazim Tehsil Shakar Ghar respected  Dr. Ni`mat Ali Javaid who is the father of provisional health minister Dr. Tahir Ali, came for visiting the surgery camp. The reporter, Mr. Khan Abdul Qayyoom and others welcomed him for coming in the camp. The chief coordinator Mr. Abhul Huyy delivered short briefings to him. Then the respected guest was caused to visit the whole camp and operation theater as well. He visited the all patients in different wards and make some queries from the patients arrived from Tehsil Shakar Ghar. A phone call of his son Provisional Health Minister Dr. Tahir Ali was received twice by him during his visit. He let him know about the activities regarding the camp and his visit. While giving the answer to the journalists, the respected guest said, I m much impressed by the work of Minhaj ul Qur`an and agreed to their plans and thinking. Hence, on the third day, the operation were being done till late at night. It should be kept in mind that there were many patients who were operated after stunning them completely.  Enthesia Specialist Dr. Ahmad Chishti was also present to stun them. Thus, three day for surgery were completed. But some patients were also operated on the fourth day, 9th of October. Which was the the ending day of the camp. Therefore, after the 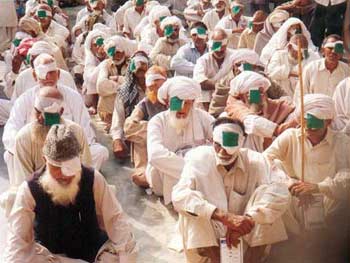 checking round of the patients who were operated on the third day, Saturday, 9th of October, at 10 O` clock, an ending ceremony started where all patients and their caretakers were sitting in the yard of Islamic Centre. Whereas on the stage, with doctor Amanat Ali, the special invited guests from Markazi Minhaj ul Qur`an Welfare Society Mr. Safdar Abbas, Haji Muhammad Ismaeel chaudhry, Mr. Hafiz Abdul Huyy, Mr.Khan Abdul Qayyoom Khan, Mr. Allama Abdul Razzaq, father of journalism and special reporter of Nawa-e-Waqt M.Hafiz Ullah and Mr. Saghir Shah were also having their seats. The chief coordinator of the camp Hafiz Abdul Huyy while delivering his speech told that there was full coverage of this camp in the local News papers, due to which a person from Bahawal Nagar brought his sole son along with the news paper cutting  to Minhaj ul Qur`an camp for his eye treatment. His son was treated and given the return fare as well. He told that the eyes of 238 patients who have been in this ceremony, checked this year. Markazi Secretary Welfare while delivering his speech said that Society Insha`Allah wants to spread its welfare projects through out the country especially in backward areas under the leadership of Pro. Dr. Muhammad Tahir ul Qadri. He while addressing to the donators said that have you seen the work of Minhaj ul Qur`an. So you are supposed to be the arms of this society in this welfare resolution. In the end, Dr. Amanat Ali gave special briefings regarding precautions and follow up the holding of this camp. He told that its necessary for every patient to come and get his eye checked 5 times by December by the follow up of the camp. And even then if any patients have any problem, he may go to Me hospital along with the card which was issued him at the time of operation, he will be treated free. In the end of the ceremony the special shields and certificates were given to doctors, paramedical staff and workers besides this every patient was given eye drops and medicine of rupees 200/-. In the end, the special  prayer was done for the health of patients, success for qauid-e-tehreek and entire persons who took part in this camp..