PAT to take our countrywide rallies against terrorism on Sunday 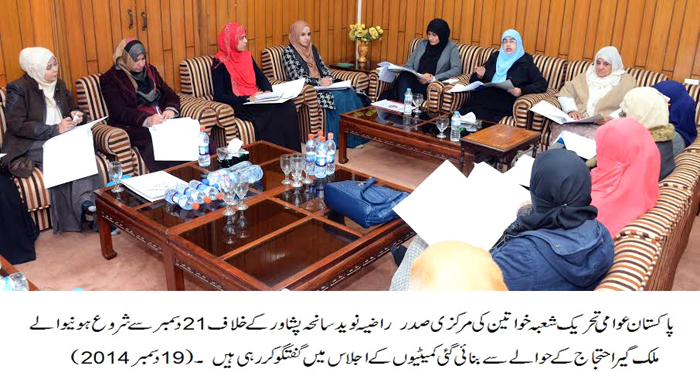 An important meeting of Pakistan Awami Tehreek (PAT) was held on December 19 at the central secretariat which was presided over by central president Dr Raheeq Ahmad Abbasi. The meeting decided that PAT will take out countrywide rallies against terrorism in 60 cities on December 21 (Sunday). The major purpose of these rallies is to express solidarity with the bereaved families of Peshawar tragedy and to show that the nation stood by them in this great hour of trial and tribulation. 40 committees consisting of central and provincial leaders were also constituted to make arrangements of these rallies. The meeting was attended by PAT Secretary General Khurram Nawaz Gandapur, Ahmad Nawaz Anjum, Zahid Fayyaz, Sajid Bhatti, Jawad Hamid, Hafiz Ghulam Farid and others.

A special message of PAT chief Dr Tahir-ul-Qadri was also read out on the occasion. In his message, he said that “terrorists want to malign Islam and portray Pakistan as a failed state. Every citizen of the country will have to forge unity in their ranks to protect national ideology and support the armed forces to defeat the nefarious designs of terrorists. The need of national unity and solidarity has never been greater than it is today. The PAT workers should accelerate their efforts for elimination of every kind of exploitation, injustice and terrorism. Time has now come that the enemies of Islam, Pakistan and humanity are eliminated from the motherland.”

The PAT leader will address a press conference in central secretariat at 5 p.m. on December 20 and present a strategy for elimination of terrorism in the country.