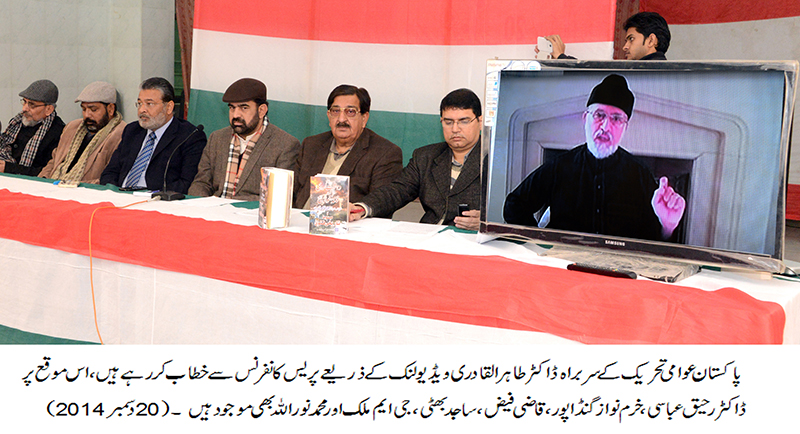 PAT chief Dr Muhammad Tahir-ul-Qadri has announced a 14-point comprehensive strategy for eradication of terrorism in a press conference live from the US through a video link today. He described terrorists and their patrons as the biggest and topmost problem for the country. He said that in order to eliminate terrorists and their supporters:

Dr Tahir-ul-Qadri said that 2025 cases of terrorism are pending in 55 anti-terrorist courts for last 5 years, adding that these cases were required to be decided in a span of a week under the relevant law. He said that Pakistan is the only country of the world where majority of terrorism-related cases are pending. He said that the Chief Justice of Pakistan has rightly called an emergency meeting of senior judges of the apex court to discuss cases related to terrorism. He said that following Peshawar tragedy, it is the Army Chief alone who is seen to be taking hard and solid decisions. He said that kind of decisions and steps the nation expected of their political leadership after heart-rending tragedy in Peshawar have not been seen as yet. He said that the nation fails to understand as to why joint session of Parliament has not been convened as yet? If the longest running session of Parliament could be held during the days of sit-in, why could it not be called now? He said that the joint sitting would have been held on the evening of Dec 16 to decide next course of action. He said that even if the session of rubber-stamp Parliament could have been called to condemn terrorism for the sake of appearance, the world would have got a good impression of us being very serious in our resolve to uproot terrorism from our midst. He warned that if no solid steps were taken now, the incidents such as Peshawar and Model Town tragedies would continue to recur in future as well. These incidents would feed people on hatred and anxiety to the benefit of the terrorists.

Dr Tahir-ul-Qadri said that it is hard and undeniable reality that 55,000 people lost their lives in war on terror but Parliament, judiciary and executive failed to play their role in such circumstances. He said that though it is not time to play politics, yet speaking truth substantiated by evidence is not politics. He said that when the rally of former Prime Minister Mohtarama Benazir Bhutto was attacked on October 18, 2007 in which 139 people were killed, why did we not wake up to the threat over our heads then? He said that 64 people were martyred in two blasts in Wah Ordnance factory in 2008. GHQ was attacked. Our sensitive military installations were the target of terrorist attacks and Wagha border was the latest scene of carnage but why did the eyes of our political leadership not open up?

The PAT leader further said that 92 people belonging to Shiite community were massacred in suicide hits in Quetta on January 10, 2013, why did the eyes of the powers that be not open up? Then 89 people were killed in terrorist attack in Hazara town market on February 16, 2013 but no one was bothered. He said that terrorists have indiscriminately targeted people belonging to all communities, ethnicities, schools of thought and various walks of life and professions. He said that with this background in view, we should now shun academic debates whether this is our war or not. He said that fighting against terrorism is not the military’s job alone, adding that every citizen and institution of Pakistan will have to stand by their armed forces to win this battle. He said that a number of countries have recently defeated terrorism and won this war.

Dr Qadri said that if the government tried to sabotage this environment of national unity and solidarity, the nation would mete out the same treatment to the rulers it has shown towards the terrorists. He said that it is our war and it is about time all decisions were taken to win this war. He warned that if we still waver in our resolve, then it would probably be too late. He said that the terrorists violate the law, morality, Constitution and humanity with abandon and soak their hands with the blood of innocent people. He said that when some of them get caught, we start talking of judicial system, human rights, and law. He made an appeal to legal fraternity and the civil society not to get the people in the tangle of legal niceties on the issue of terrorism. He suggested that if some provisions of law hamper the process of awarding punishment to terrorists, the legal hurdles should be replaced by issuance of Ordinance and the terrorists are meted out exemplary punishment.

Dr Tahir-ul-Qadri said that no other political party has such clarity on the issue of terrorism as PAT has. He said that our workers have rendered sacrifices for national objectives and they are ready for future too. He said that PAT is going to take out countrywide rallies to protest terrorism on December 21. He appealed to the whole nation to attend these rallies in large numbers as doing so would send a strong message to the world and terrorist forces that we are not scared; rather our resolve has further become stronger than before. He said that PAT will continue its struggle against terrorism at intellectual and ideological struggle. He said that awareness campaign will be run throughout the country with an objective to raise awareness against terrorism. He said that seminars, workshops and conferences will be held under the aegis of PAT in this regard. He said that national consensus is a must to disrupt and defeat terrorism in the country.