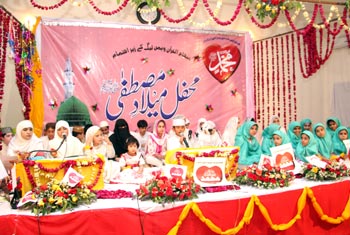 
Minhaj-ul-Quran Women League organized the second annual Mahfil-e-Naat of children in the Ladies Club Model Town, Lahore on April 13, 2008. This programme was in connection with the ongoing Milad celebrations under Minhaj-ul-Quran International. The daughters of Shaykh-ul-Islam Dr Muhammad Tahir-ul-Qadri, Mrs Qurat ul Ain Fatima and Ms Qurat ul Ain Ayesha co-chaired the programme, whereas grand daughter of Shaykh-ul-Islam Durra-tuz-Zahara was the guest of honour at the occasion. Children aging between 6 and 12 years participated in the programme. The children who participated in the programme belonged to Beacon house, Saint Candy, Aitcheson, Dara-e-Arqum, Lahore Grammar School, Wali Muhammad, ARC, Ali Foundation, and Tehfeez-ul-Quran Institute etc.

It was with the recitation of the Holy Quran that the proceedings of the programme got under way. Qari Owais Saqib recited the glorious Quran followed by further recital of the Quran by Qari Hassan Khan Niazi, Mudassar Hussain, and Umer Mustafa. Those who paid tribute to the Holy Prophet (saw) in the form of Naat included Hassan Mujtaba, Sumra, Iqra Rashid, Hammad Mustafa, Zain Zahid, Talha bin Ijaz, Zobia Saher Tanvir Qureshi, Tayyab Tariq, Ayesha Tariq and Furrukh Iqbal. The participating children expressed their feelings by raising their hands and waving small flags bearing name "Muhammad' on the image of heart in red colour. 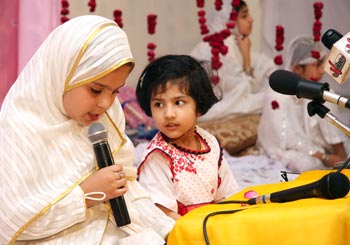 Fatima Noor and Aimen Noor delivered speeches in Urdu. They told their young fellows about Milad-e-Mustafa (saw). Hadi Bin Ijaz delivered speech in English language. The participants clapped and supported the young speakers. The students of Candy Saint School presented a beautiful skit for the moral training of young children. This skit sought to persuade children to healthy activities and religion. The children belonging to Wali Muhammad School presented a tableau on "O people coming from there! Tell us how does Madina look like"

After the presentation of skits, Rabia Saqib, Tayyab Saqib and Sumra told the practical method of performing abolition. Haider Mustafa, Mohsin Khan Niazi, Faizan and their companions informed the children about the way of offering prayers. These children made practical demonstrations in this regard. Faham, Saliqa, Ayesha, Raza Mustafa and their companions told the way of eating food in accordance with Sunna. They also threw light on washing hands before and after eating food and other etiquettes. 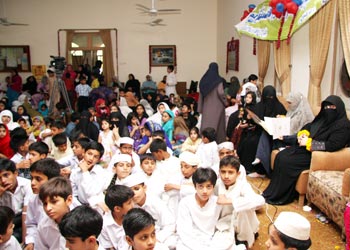 Special shields were also given away to the sponsoring institutions and other advertisement agencies throughout Lahore. The caretaker of the programme and its head Fatima Mashahidi and Iffat Waheed distributed shields among the representatives of sponsors. At the end of the programme, all children waved the small flags bearing name 'Muhammad' (saw) and adopted a resolution for the protection of sanctity and status of the Holy Prophet (saw). Misbah Sadif, Sadif Iqbal and Fareed Fatima conducted the proceedings of the programme jointly. Quratul Ain Fatima led the concluding prayers. 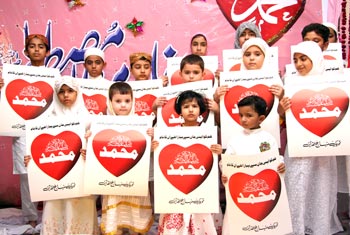 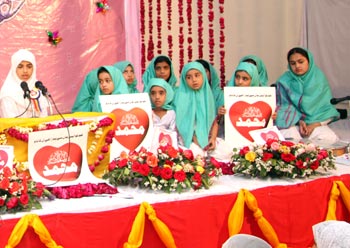 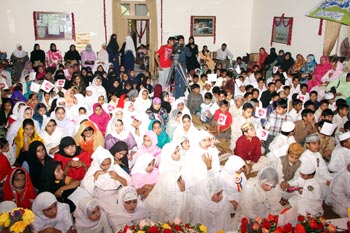 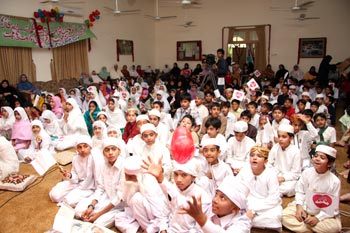 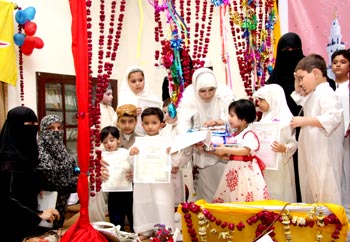 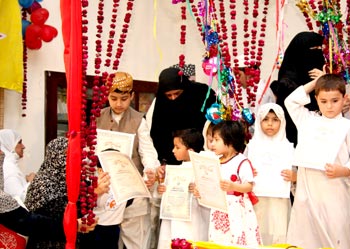 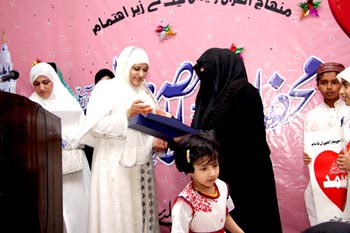 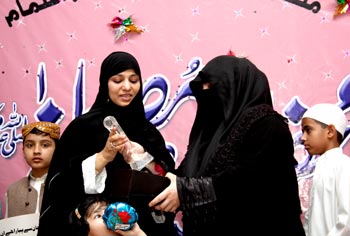 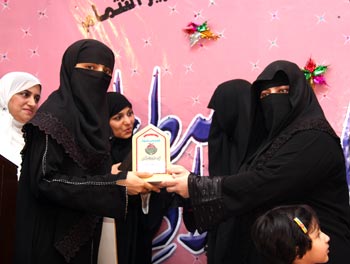 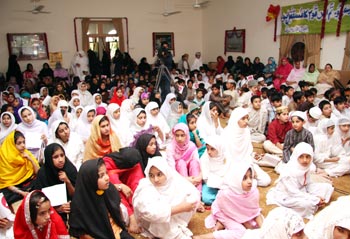