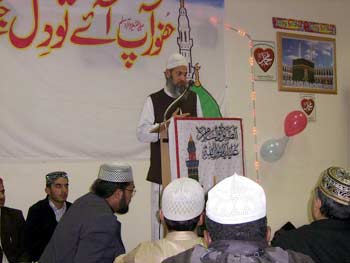 The Month of Rabi ul Awwal announces the arrival of Allah's greatest favor bestowed upon all creation. On the 12th of Rabi-ul-Awwal The Most Beloved Prophet of Allah (SWT) was born in this world.

In this month the Followers of the Holy Prophet Muhammad (SAW) show their love for their Beloved Prophet (SAW) by celebrating His Birth.

Through the platform of Minhaj-ul-Quran for the first time in Ireland this year in various cities great spiritual gatherings were organized to celebrate the Birth of our Beloved Messenger (saw).

The first Gathering took place on Sunday (1st Rabi-ul-Awwal) in Minhaj-ul-Quran Ireland's Al-Hidayah Islamic Centre. The whole centre was decorated for the celebration throughout the whole month. 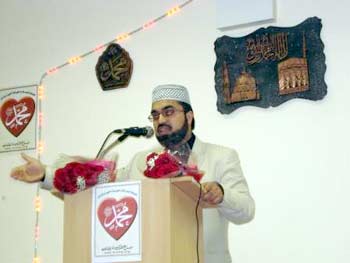 Sheikh Allama Zille-Umar Qadri delivered a very heart warming speech on the importance of celebrating Milad-un-Nabi (SAW) and its objectives. He said that the first and foremost objective of Milad Celebration is to thank Almighty Allah (SWT) for His greatest favor He bestowed upon us. Indeed this is the Holy Prophet Muhammad (saw). Other objectives include strengthening the relation with our Beloved Prophet (saw), spreading the Love of Prophet (saw) among the audience and specially the children, increasing our knowledge about the Seerah of the Beloved Prophet (saw) and increasing our practice upon the Seerah. Allama sahib also stressed that celebrating the Milad is an accepted act in light of Hadith of Bukhari in which Hazrat Abbas (RA) was told by Abu Lahab that he receives reward in the Hell because he celebrated Milad by freeing his servant Thuaibah out of Joy. 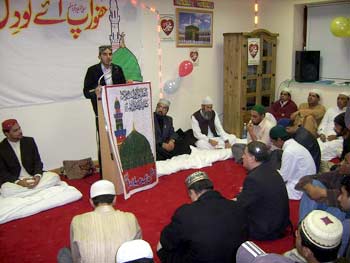 During the motivating speech some participants decided to hold celebrations of Milad-un-NAbi (saw) in their houses.
Allama Zille-Umar Qadri appointed Mian Awais Ahmad as co-ordinator of all Milad-un-Nabi (Saw) gatherings on platform of Minhaj-ul-Quran Ireland.

The second gathering of Milad-un-Nabi (saw) was held in the House of Mian Awais Ahmad. The whole house was decorated with lights and posters of Ism-e-Muhammad designed by IT department of MQI International. Syed Toseef Hussain recited Holy Quran. Nasheeds were recited by many local naatkhwan. Allama Zille-Umar Qadri delivered a speech on the Virtues of Durood and Salaam.

The programme started at 8pm with Durood 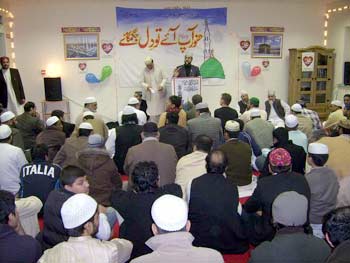 paak till 9. From 9pm till midnight the Gathering continued.Many Shia Muslims also joined this gathering.

The 3rd Gathering of Milad-Un-Nabi (saw) took place in the New House of Mian Munir Akram. Mian Munir Akram is an executive member of MQI Al-Hidayah Islamic Centre. His wish was to start living in his new house only after organising Milad-un-Nabi (SAW). The house was beautifully decorated with Isme Muhammad (SAW) posters and lights.

Many business men of Ireland were present in the spiritual gathering. Mian Awais recited verses from The Holy Quran. Syed Jawad Haider, Faiz-ul-Hassan Shah, recited Nasheed. Then Allama Zille-Umar Qadri sahib delivered a speech in which he said that we need to establish a relation with the Beloved Messenger (SAW) the same way the Companions did. Their relation with the Beloved Prophet (saw) was not based on intellect but purely Love.It is the Mission of MQI to strengthen the relation with Holy Prophet (saw). 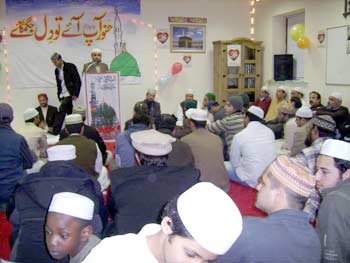 The 4th gathering was the largest EId Milad-un-NAbi conference held in Dublin untill now. On the 21st of March the 4th Annual Milad-un-Nabi (saw) Conference was held by Minhaj-ul-Quran IReland in Al-Hidayah Islamic Centre.Muslims from all over Ireland came to this conference. 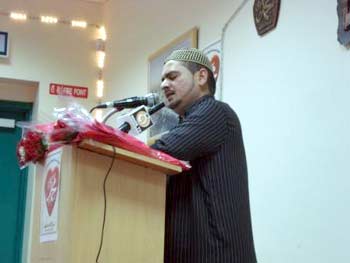 The climax of the conference was the Ziyarah of blessed hair of The Prophet (Saw). A very emotional duaa was led by Allama Zille-Umar Qadri sahib and the conference ended with Ziafat e Milaad.

On the 28th of March Milad-un-Nabi (Saw) gathering was organised specially in honour of guests from UK who arrived in Dublin to attend the First Annual Milad Conference in Ballaghederreen, Ireland. The guests from UK were Alhaj Shaukat Ali, Mukhtar-ul-Mustafa Hamdami and Muhammad Milad Raza Qadri

Alhaj Shaukat Ali brought along many Blessed Holy Relics and Ziyarat was arranged in AL-Hidayah ICC.

On the 29th of March the First Annual Milad Conference took place on the platform of MQI Ireland. Details of this programme have been posted online already. 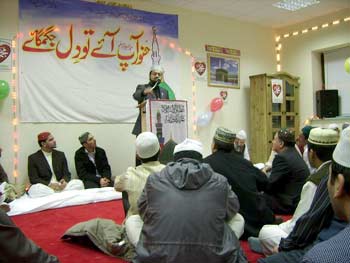 On the 30th of March First Annual Milad Conference took place in BallyRog, IReland. Many Muslims joined this blessed gathering.

And on the 31st of MArch the last Milad-un-Nabi gathering of years Rabi-ul-Awwal was organized in the house of Allama Zille-Umar Qadri.

This was a very spiritual and special gathering as in this gathering a dream was narrated by Allama Zille-Umar Qadri sahb and Alhaj Shaukat Ali sahb and Mian Awais sahb to the audience. In this dream The Holy Prophet (saw) was seen and he was asked by the person who had the dream O Beloved Aqaa (Saw), where are you going? The Holy Prophet (saw) replied I am going to MQI AL-Hidayah Islamic centre.This dream was seen on the night the Milad Conference was held in MQI Al-Hidayah Islamic Centre. The participants of this blessed gathering became emotional and all cried in love of Holy Prophet (SAW). Allama sahb said that this is special faiz of mission of Minhaj-ul-Quran which is based on Love of the Beloved Prophet (SAW). This Mehfil was ended with the Ziarat of the Holy Relics of The Prophet Muhammad (SAW).

May Allah (swt) keep us attached with this blessed mission and accept our humble efforts for the revival of Ishq-e-Rasool (SAW).