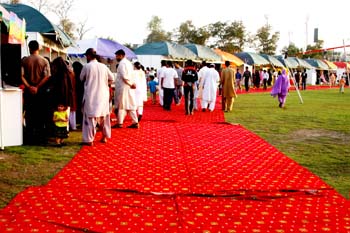 Milad Festival organized under aegis of Minhaj-ul-Quran Women League came to an end. The concluding ceremony was held in the crowds of families on the last day on April 20, 2008 at midnight in the Race Course Park. Prior to this, hundreds of people continued to flock the venue on the last day along with their families including prominent people from different walks of life. People started coming in at 10 in the morning and their arrival continued without any break during the whole day. They visited various stalls and did shopping.

At the kid's corner, the Mahfil-e-Milad and competition of paintings among children were held even on the last day. A greater rush was seen at the stall of 'blessed and sacred things' than at any other. The visitors entered the gallery here by taking off their shoes as a mark of respect. This gallery featured the rare things of Islamic history and the holy life of the Holy Messenger (saw), which included his blessed hair, shoes, bed and other things. After visiting this stall, most of the visitors told in emotional voice that they saw these holy things for the first time in their life. Especially seeing the things associated with the holy of the Prophet (saw) was a matter of great and rare honour. Small children were also expressing their interest like elders. Beautiful Naats were also being recited to make the atmosphere blessed one. Played in low key, these Naats invested beauty and touch of spirituality in the atmosphere. A group of children was also performing with 'duff' on the one side. 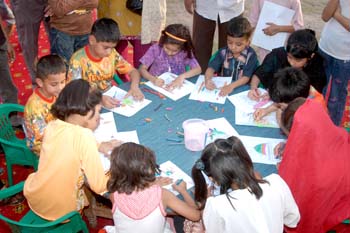 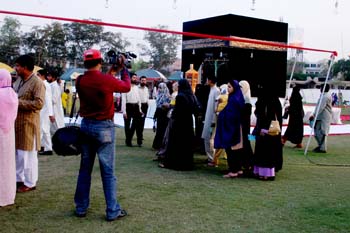 Before the concluding ceremony, firework was demonstrated. The daughter of Shaykh-ul-Islam Dr Muhammad Tahir-ul-Qadri, Mrs Qura tul Ain Fatima led the concluding prayers. It was the first ever event conducted by Minhaj-ul-Quran Women League. However on the insistence of families, the duration of this Festival will be increased in the coming year.

From among the prominent people who visited the Festival on the last day were actors Irfan Khosat, Nishu Begum, Muhammad Afzal alias Ramboo along with his wife actress Sahiba, the federal Minister and PML-N leader Khawaja Saad Rafiq and his wife. 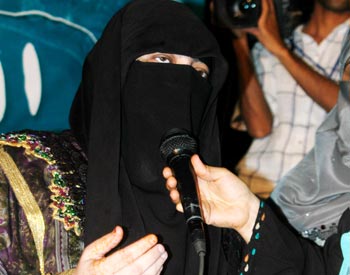 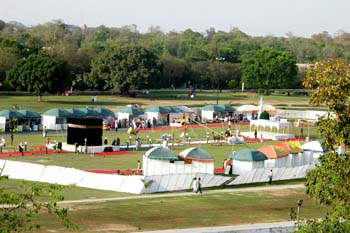 Allah Almighty says, "If you want to love me, love my Prophet (saw). Then I will love you." The practical demonstration of meaning of this verse is visible in the Race Course Park on the platform of Minhaj-ul-Quran International under the dynamic leadership of Shaykh-ul-Islam Dr Muhammad Tahir-ul-Qadri. She said Shaykh-ul-Islam is one of great people of this age about whom Allah Almighty said that if you looked at the faced of His Friends, Saints and Beloved people, it would remind you of Him. And if you hear them speak, you are guided along the right path.

Through the conduct of Milad Festival, Shaykh-ul-Islam Dr Muhammad Tahir-ul-Qadri has practically demonstrated the love of the Prophet (saw). He has urged people to seek nearness to Allah Almighty through the Holy Prophet (saw). She said being the Umma of the Holy Prophet (saw), it is our duty to celebrate his birth anniversary with zeal and zest because this is also Sunna of Allah. When the Holy Prophet (saw) was born, Allah Almighty Himself celebrated the birth of His beloved Prophet (saw) along with angels. Hazrat Asiya and Hazrat Maryem descended on the earth to tell Hazrat Amna (RA) that the blessed personality of the universe would be born to her. Living ones life in accordance with the commands and instructions of Allah and His Prophet (saw) is the touchstone upon which we can measure our successes and failures. It is a matter of great misfortune that we have given up the teachings of Allah and His Prophet (saw) but they have not left us to fend for ourselves and have continued to shower their blessings upon us in spite of our failings. We need to promote new Islamic culture among our young generation in Pakistan and Muslim Umma. 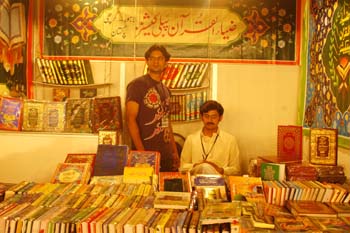 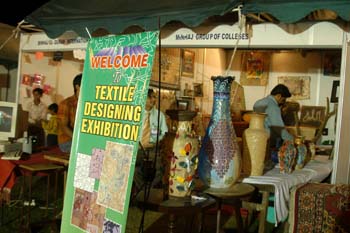 Shaykh-ul-Islam has told us that if we held onto our religion, we would not go astray. She appealed to Islamic organizations not to be jealous; rather they should join hands with Shaykh-ul-Islam and promote Islamic culture. She asked if our God, Prophet, Kalma and Holy Book were one and we are one Umma, then why were there cracks in the body politic of Umma and sectarian fissures? She also demanded of the Government of Pakistan to make sincere efforts for the promotion of Islamic culture. 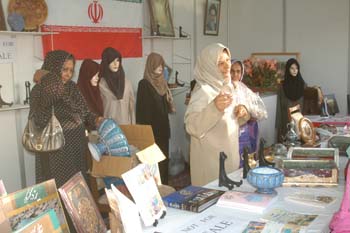 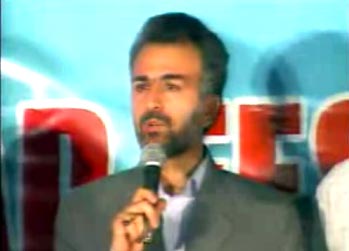 All arrangements have been made in the Milad Festival of Minhaj-ul-Quran Women League keeping in view the cultural demands of people. In addition to this, there is also an arrangement for the spiritual food for people. There is a need to popularize it. He said Shaykh-ul-Islam Dr Muhammad Tahir-ul-Qadri is a great personality of the Islamic world and his understanding of the Holy Quran and services for the religion are unforgettable. We all pray to Allah to grant him good health and long life. 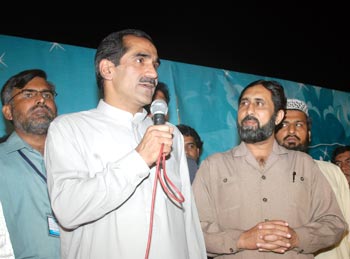 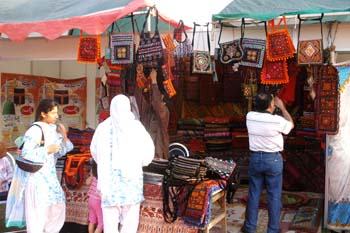 Federal Minister for Culture Khawaja Saad Rafique congratulated all members of Minhaj-ul-Quran Women League on the organization of such a beautiful Milad Festival, saying he never saw such event anywhere. He said that Minhaj-ul-Quran Women League merged cleanliness and piety with culture, which is what we espouse. Whatever is being shown in the name of enlightened moderation does not represent our culture. He said that beautiful atmosphere has been presented here. It is a matter of great misfortune that effort has been made to impose alien culture upon us in the name of enlightened moderation. He prayed to Allah to enable us to make Pakistan a stable and prosperous country of the world. 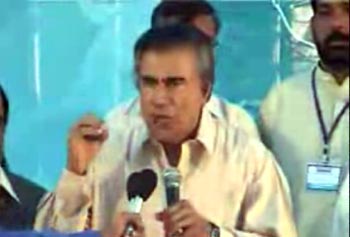 He said I have been living here in Lahore for many years but I can say with pride that I have come to Race Course Park for the first time in my life. I regard myself to be lucky that I have the honour of visiting Milad Festival. This is our culture, which needs to be presented to the world in a scientific way. He said we should project all our Islamic values before the world starting from dress and food to broad spectrum of inter-state relations. If some institution made such effort, it would be great service indeed. He also extended his felicitation to Minhaj-ul-Quran Women League on the conduct of Milad Festival. He said that Minhaj-ul-Quran Women League has spread new awareness among people about celebrating Milad. He said I have visited all stalls bearing different items which belong to the ancient days but have been presented in a scientific fashion. He said Minhaj-ul-Quran Women League has lighted the first lamp and people who have come to visit this would definitely replicate it in their own areas and localities. We should be proud of our Islamic values. 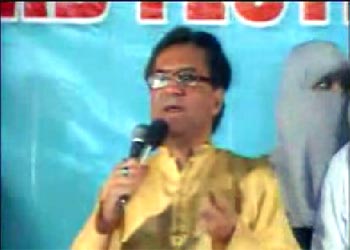 The candle lit by Shaykh-ul-Islam Dr Muhammad Tahir-ul-Qadri has become great torch. If Christians and Jews can celebrate the birth days of their Prophets as Eid, what has happened with us as to why should not we celebrate the birth day of the Holy Prophet (saw) as Eid? Celebrating two Eids is the Sunna of the Prophet (saw) but our actual Eid is the birth anniversary or Milad-e-Mustafa (saw). This is the rare Festival of its kind which has been arranged in connection with the Milad. We would continue to do this because celebrating the Milad of the Prophet (saw) is our faith.

Only Allah and His Apostle (saw) know how happy I am being here at the Milad Festival. You are the people who are persuading people to the path of piety and discouraging them from following the wrong path. I am lost in the Milad of the Prophet (saw). I cannot image to see these moments in my dream. I extend my heartfelt felicitation to Minhaj-ul-Quran Women League and Shaykh-ul-Islam Dr Muhammad Tahir-ul-Qadri upon organizing such a great event.

I was immensely tired before coming here but all fatigue has gone now once I am present here and visiting this place. My heart feels contentment. He said women do not merely go to attend Mina Bazar or any recreational places, they are also at the forefront in spreading love of the Prophet of Allah (saw). I salute Minhaj-ul-Quran Women League on holding this beautiful Milad Festival. 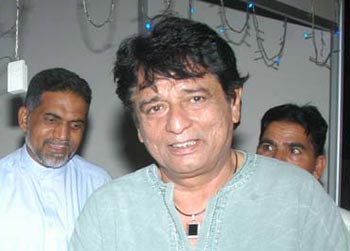 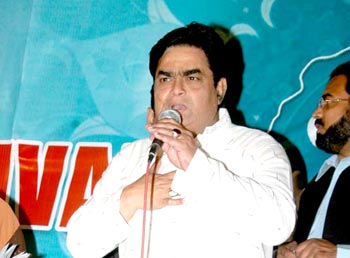 I feel great calm and peace and have come to know that what really matters is what provides you solace and mental peace. Those who have not been able to visit this place should do so at the earliest. Minhaj-ul-Quran Women League has given a message to the world that people are still available to protect their faith.

Our hearts have started beating fast to see the blessed things here. May Allah bless all people and Minhaj-ul-Quran Women League who have arranged this event! We also pray to Allah for Shaykh-ul-Islam Dr Muhammad Tahir-ul-Qadri who has given people new awareness to celebrate Milad. 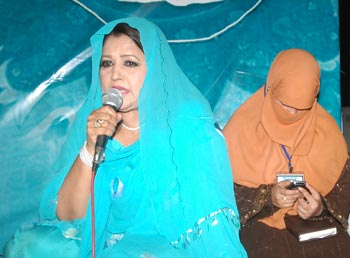 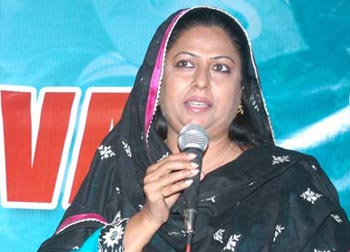 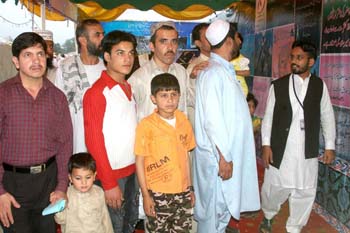 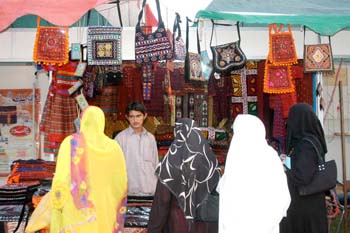 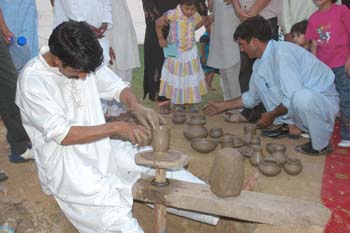 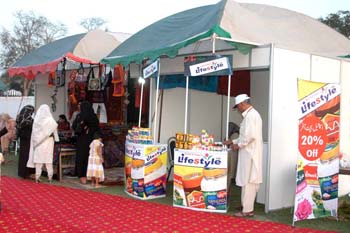 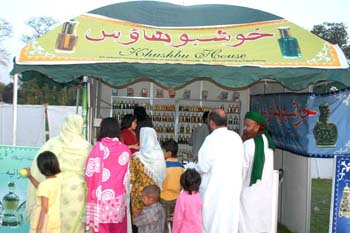 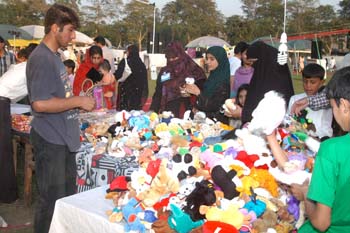 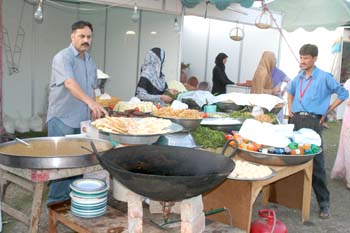 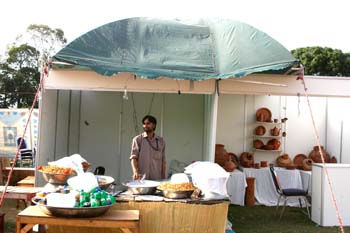 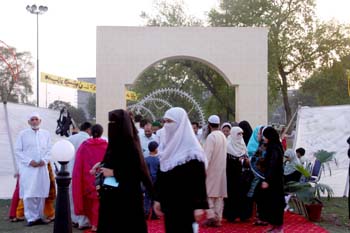 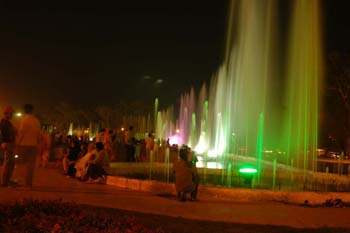