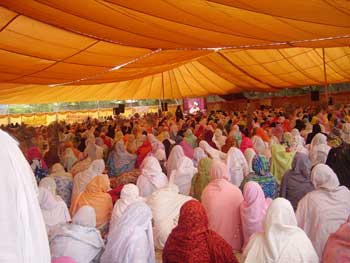 By the Grace of Allah Almighty & the Waseela of His Holy Prophet Muhammad (S.A.W), the 3rd day of sisters’ I’tikaf was a very successful day. The third day began in fact on the night of 23rd Ramadan. A beautiful mehfil-e-naat was being conducted on the brothers’ side. It was transmitted live to the sisters’ side. Minhaj naat council of Sharia College & MANY OTHER FAMOUS Naat khawn made the mehfil a truly spiritually inspiring event. It became a symbol of love for the Holy Prophet Muhammad (S.A.W) & thousands of sisters & brothers shed many tears as the beautiful nasheeds. This mehfil continued for the whole night in the company of Hazoor Shaykh-ul-Islam Prof. Dr. Muhammad Tahir-ul-Qadri who made beautiful changes to the poetry being recited making all that more loved for Holy Prophet Muhammad (S.A.W). 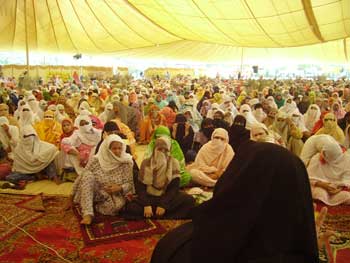 Then all the sisters performed wudu & stood before Allah Almighty, when He is closest to His people, during the time of Tahajjud.

Sisters offered their Tahajjud prayer & took their sehri meal. Then after offering Fajjar prayer, all the sisters rested since they had been up the entire night during the mehfil.

The sisters gathered in the central conference area for Salaat-u-tasbeeh at sharp 9:00 am 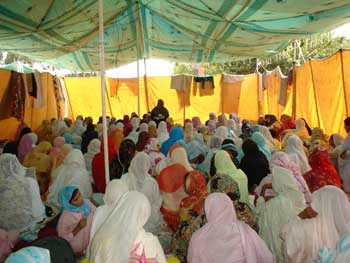 At sharp 9:30 immediately after Salaat-u-tasbeeh, Sister Saba Fatima Mash’hadi (President Central Minhaj-ulQuran Women League), Fareha Khan (Director Central Department of Dawa’) & Sadaf Iqbal (Co-Director Central Department of Dawa’) met all the lecturers of halqa jaats (Irfan-ul-Quran circles). Sister Saba Fatima Mash’hadi gave a very inspiring talk on the introduction, practices & mottos of Hazrat Fatima-tu-Zahra (R.A). She discussed their halqa jaats with them & told them that they have to indulge Ishq-e-Mustafa (S.A.W) & Khasheyat-e-Illahi in the heats off all the attendants. She added that all the lecturers have to become role models for their students & it is only possible if they will act strictly upon the uswa (life style) of Sayyada-e-Qaeynaat (S.A.W).

At 11:00 all the sisters in the I’tikaf attended their training Irfan-ul-Qura’n circles (Halqaas). Teachers (mua’limat) taught them Surah-e-Yaseen with Tajweed (accent), translated it & described in detail shan-e-nazool and tafseer (background & explanation).Moreover they told the sisters how to do Wudu. 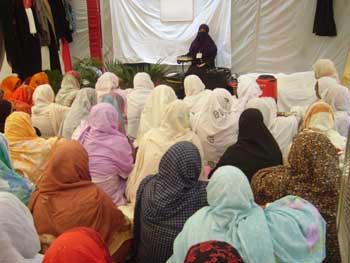 The central Minhaj-ul-Quran Women League has designed a booklet naming “Taharat Kay Masail” containing all these aspects which is available for all to read. Then all the attendants went back to their rooms for preparing themselves for Zohar prayers.

1st Meeting with the students of Fatima Hall: 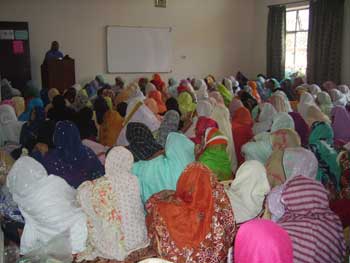 importance of students’ role in building nations. She gave examples from the student life of Sahaba-e-Karam (R.A) & motivated the sisters to change their life style in the light of Islam. Sister Sajida Sadiq invited the students to join MSM & play their role for Mustafvi Inqilab as an active member of Tehrek Minhaj-ul-Quran.

Sister Nabeela Javaid Mustafa & Sister Khadeja Fatima conducted a meeting with all the room heads of Zainab Hall. Sister Nabeela said that Allah Almighty shower His special blessings on those who love His beloved Prophet (S.A.W). She added that all the sisters should recite at least 1000 times salutions upon our beloved Prophet Muhammad (S.A.W). All the sisters promised & assured that they will spend most of their time in reciting Darood-o-salam Insha’Allah. Sister Khadeja Fatima distributed forms among the heads of Darood-o-salam circles to collect the data of mutakifats & amount of salutions recited in Darood-o-salam circles. 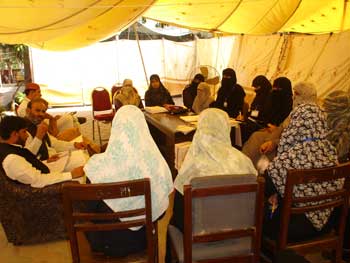 A meeting was called by Sister Fatima Mash’hadi in which all the members of the committees & heads of all halls participated. They discussed all the problems they are facing. The coordinating team of brothers was also there & they assured that they will try there level best to solve all the problems.

Women league’s central team is arranging daily Iftaar dinners with all the administrative teams in I’tikaf to appreciate them for serving the guests in this I’tikaf. No doubt all these sisters are working extremely hard to make all things run very smoothly.

So on 23rd Ramadan the Minhaj-ul-Quran Women League Central team met all the lecturers at Iftaar dinner.