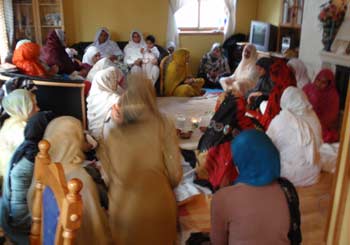 By the grace of Almighty Allah swt and His Beloved Prophet Muhammad saw the Dawah and Tarbiyah group under Minhaj Women League Norway (MWL) has planed to establish regularly Halqa Durood mehfils on monthly basis for women in different areas around Oslo.

Alhamdulillah the first Halqa Durood mehfil under the Dawah and Tarbiyah group of MWL was held on 26th of October 2008 in Høybråten (area of Oslo) in sister Uzma Hamid’s home.

The guests started to arrive at 14:15. The total amount of the participants was about 30 women and 10 children and the room was filled to its maximum capacity. There were 6 participants from MWL. The guest of honour President of MWL Norway respected Rafia Rauf, media secretary sister Ayesha Khan and vice finance secretary sister Amber Khan, along with the three members of the Dawah and Tarbiyah group mentioned above, participated in the opening ceremony of Halqa Durood.

The programme started at 14:45 with Tilawaah by sister Tasneem Akhter. Thereafter sister Safia recited Qasida Burdah Sharif. Then sister Noshaza Hussain welcomed the guest of honour and her team along with all the participants on behalf of the Dawah & Tarbiyah group. Then she gave a brief introduction where she presented MWL Norway and Dawah and Tarbiyah group. She informed that the Dawah & Tarbiyah group will InshAllah start regularly Halqa Durood mehfils on monthly basis in the major areas in and around Oslo.

Furthermore she explained why Huzoor Shaykh ul Islam Professor Dr Muhammad Tahir-ul-Qadri started Halqa Durood. One of the purposes is to: 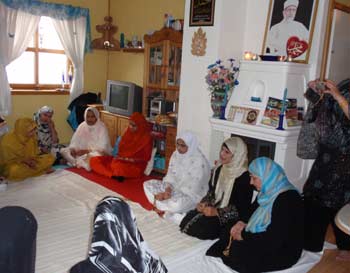 Thereafter sister Safia Ashfaq started to recite Durood loudly for 5 minutes. Then everybody recited Durood in silence for about 50 minutes.

Totally amount of durood that was collected was 28,300 times.

After reciting of Durood, it was time for praying Salat ul Asr. After performing Salat ul Asr, a very touchy khitab of Huzoor Shaykh ul Islam was shown on VCD, ”Durood va Salam, eek daimi amaal hai”, VCD 495. After watching the khitab for about 20 minutes, sister Safia Ashfaq read beautiful nasheeds. Some of the guests also contributed in delivering beautiful nasheeds. Then Salam to Beloved Prophet Muhammad saw was sent and sister Safia Ashfaq made dua.

Respected Rafia Rauf, president MWL, congratulated the Dawah and Tarbiyah group for a successful arrangement and management of the opening ceremony of Halqa Durood.

This first mehfil of Halqa Durood was MashAllah a very beautiful and successful event and became a symbol of love for The Holy Prophet Muhammad saw.

Since this was the opening and start of Halqa Durood mehfils, the guests were served a light meal and fruits after performing Salat ul Maghrib.

May Allah swt give long and healthy life to our Beloved leader Huzoor Shyakh ul Islam Professor Dr Muhammad Tahir-ul-Qadri, who has struggled hard whole his life for the betterment of the whole ummah and has shown us the path of love of The Holy Prophet Muhammad saw, Ameen.