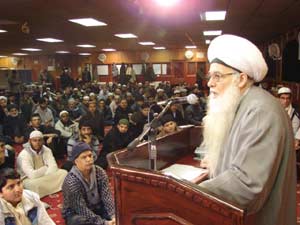 Shaykh Hisham al-Kabbani was warm-heartedly received upon his arrival by a delegation from the London based centre of Minhaj ul Quran International. Bouquets of flowers were presented to the Shaykh at the reception.

Shaykh Hisham al-Kabbani, chairman of the Supreme Islamic Council of America delivered a brief Friday sermon at the centre; he stressed upon the order of God Almighty in divine scriptures of the necessity in praising Prophet Muhammad. Speaking to an audience of several hundred people he said “sallu `alay – It is an order in the holy Quran from our Creator to send blessings upon the Prophet abundantly�? 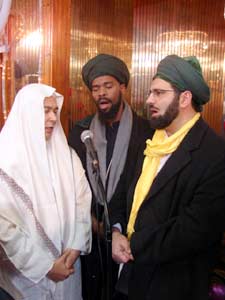 The afternoon followed with a lavish dinner under the auspices of the executive committee of the London centre, hosted the Shaykh to dinner. A close aide to Shaykh Hisham, Hadieh Mirahmadi an attorney by profession in thanking Ishtiaq Ahmad president of Minhaj ul Quran, London, Mirahmadi said “when the food is lovely we always know the people are gracious towards us�?

A delegation of senior representatives of Minhaj ul Quran, London Directorate of Foreign Affairs Dawud al-Mashhadi, President Ishtiaq Ahmad, General-Secretary Abass Aziz, Shaykh Sadiq Qureshi, representatives of the Sufi Muslim Council Chairman Shaykh Hisham al-Kabbani, Executive Director of SMC Harris Rafiq met with representatives of the US State Department Micheal Macy Cultural Attaché, Jennifer Harris Assistant Cultural Attaché in a seminar on citizenship. Other senior Muslim representatives from the United States to have participated in the seminar included Aalaa Abuzaakouk, Program Adviser, of the Washington based Muslim Public Services Network and Zeenat Rahman, Program Coordinator, Public Advocacy of the Chicago based Interfaith Youth Core travelled from the United States to partake in the seminar. The need of moderate law abiding Muslim communities around the world to resist the ideological onslaught of Islamic extremism was among the centre of themes at discussion. 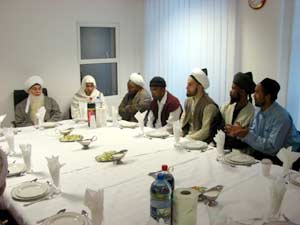 Shaykh Hisham al-Kabbani, world renowned author, chair of several organisations, Advisor, World Organisation for Resource Development and Education also Founder and President, The Muslim Magazine told Shaykh Muhammad Sadiq al-Qureshi, the Imam, Minhaj ul Quran, London of his desire to strengthen ties with one another. Shaykh Hisham earlier this year met with the profound scholar Shaykh al-Islam Dr Muhammad Tahir al-Qadri expressed his strong love and affection of him and prayed for the prolongation of his life.

A humorous Shaykh Hisham al-Kabbani prior to his departure from the centre told the Directorate of Foreign Affairs Dawud al-Mashhadi he very much resembled the Shaykh’s brother in law Shaykh al-Haj Baudeen al-Haqqani, son of Shaykh Muhammad Nazim al-Haqqani, leaving everyone in an ocean of happiness and laughter. Shaykh Hisham al-Kabbani of Lebanese and prophetic descent thanked organisers from the London centre of their hospitality.

This report is NOT subject to normal copyright laws and may be utilised by the local press. You may print or copy it or utilise it for research, if the latter, please notify us beforehand. 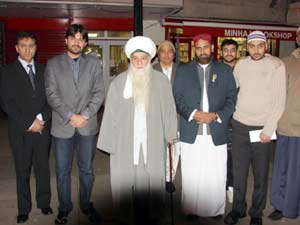