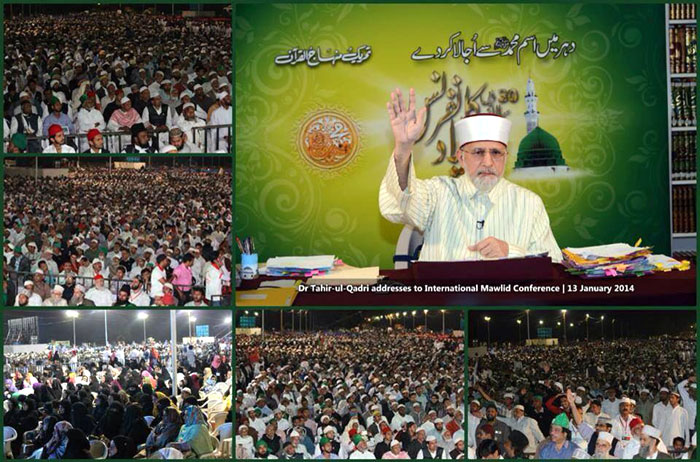 The hundreds of thousands of the faithful from the Lahore city only expressed their love for the Holy Prophet (peace be upon him) by attending the MQI's 30th annual Mawlid-un-Nabi Conference under the open skies in cold and chilling weather on Monday night. Mawlid-un-Nabi Conference (PBUH) was historic this time round in the sense that the lacs of people attended Milad gatherings held throughout the country in over 250 cities and expressed their extreme love for the Holy Prophet (peace be upon him). There was also a massive attendance of the people in a Milad Conference held under the banner of MQI (India). Shaykh-ul-Islam Dr Muhammad Tahir-ul-Qadri addressed these gatherings via video link which consisted of millions of men, women and children. The proceedings of the central Milad Conference at Minar-e-Pakistan were broadcast live around the world through ARY Zauq, QTV and Minhaj.tv. Thus millions of the faithful remained in rapt attendance of the Milad gatherings under the aegis of MQI. One of the chief highlights of the Conference was participation of over seventy thousand women and children. The mega event of MQI was presided over by Dr Hussain Mohi-ud-Din Qadri, President of Minhaj-ul-Quran International. 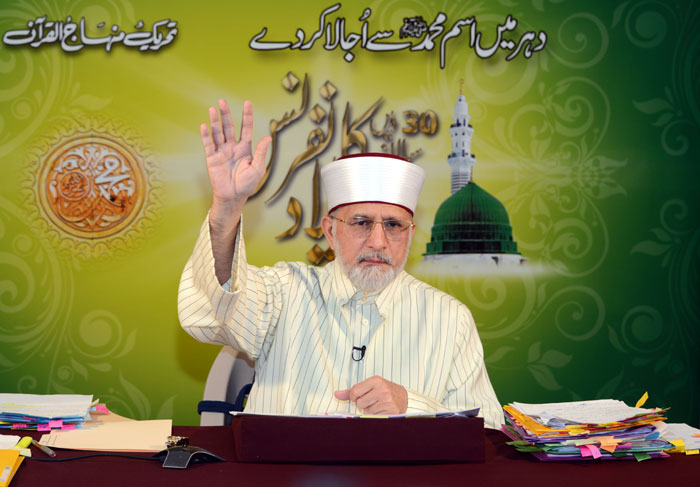 The people gave Dr Hussain a standing ovation when he came to the central stage along with Sheikh Zahid Fayyaz, President PAT, Khurram Nawaz Gandapur, Secretary General of MQI, and Jawad Hamid. Noted religious scholars, community leaders, social and human rights activists, student leaders, traders, Mashaykh and people belonging to all walks of life were also present at the occasion. Stringent security arrangements were in place at the occasion. In addition to official security, volunteers of MYL and MWL performed the security duties. The venue of Mawlid-un-Nabi Conference was decorated and beautified befittingly like a bride. Electric lights of various colors continued to blaze throughout the night. Naat Khawani remained on throughout the proceedings. Small flags bearing word 'Muhammad' in the middle in red color continued to be waved, which reflected people's extreme zeal and zest. The Milad Conference was also attended by other faith leaders as a mark of solidarity with the Muslims.

Renowned Naat Khawan from Egypt, Arab states and Pakistan presented naats and nasheed and electrified the audience with their melodious voices. Arrangements were made to show the proceedings of the Conference to the people outside the venue through installation of huge digital screens. Sound system was set up in a manner as to cover areas adjoining the Minar-e-Pakistan so that people who were not able to enter the venue due to rush could listen to the proceedings of the Conference. Durood recited at central Gosh-a-Durood of MQI and thousands of other Durood centres across the world was offered in the honour of the Holy Prophet (peace be upon him). 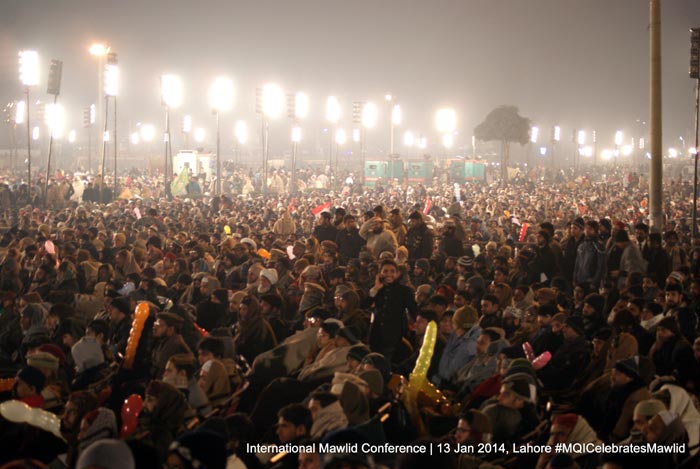 Before beginning his speech, Shaykh-ul-Islam Dr Muhammad Tahir-ul-Qadri gave the message of peace to the people of India. He quoted Mahatma Gandhi on the tranquil nature of Islam: the religion of Islam did not spread by violence; rather it spread through the perfect character and sincerity of the Prophet. According to Mahatma Gandhi, he had studied the Qur’an many times; the Qur'an did not advocate violence, terrorism and bloodshed. Then, citing the words of Quaid-e-Azam, Dr Qadri said that he always favoured peace, equality and brotherhood. On the Quaid’s attitude towards non-Muslims, Shaykh-ul-Islam said: Lord Mountbatten asked Pakistan’s Muhammad Ali Jinnah to follow the Mughal Emperor Akbar for treating non-Muslims well. In response, Pakistan’s first Governor-General said the Prophet’s conduct was a better model.

Then, in the speech, Dr Muhammad-ul-Qadri dilated on the meanings and implications of the word Nabi – Prophet. Nabi is someone who gives the news of the unseen from Almighty God to the people. Discussing the character of the Messenger, he said: “The Prophet gave all humanity a system that does not allow even a single person to remain hungry.” The people of Pakistan should rise up against the corrupt system, so that the have-nots may witness the period of happiness and prosperity.

The programme ended on special Dua for the country's security, safety, wellbeing of the people and peace in the world.