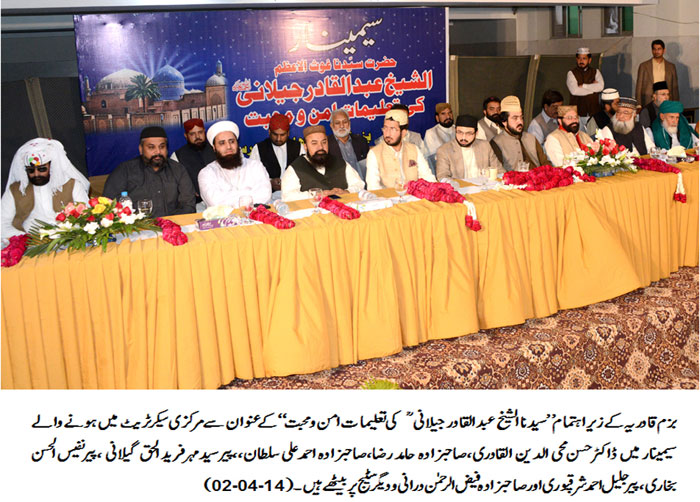 Dr Hassan Mohi-ud-Din Qadri said that it was demand of Islamic law and spiritualism that personalities like Hazrat Abu Bakar Siddique (RA), Hazrat Ali (RA), Shaykh Abdul Qadir Gillani (RA) should be followed as our role models and source of guidance and inspiration. He said that it was by eliminating all differences and forging unity in their ranks that Mashaykh and religious scholars could play a decisive role in restoring the smiles on the faces of the poor and downtrodden sections of society, adding that they needed to repeat the same role they played during the freedom struggle. He said that time to sit idle in monasteries had long been past and it was time to come out and act to uphold the banner of truth.

MQI leader said that MQI was an organization that cemented hearts instead of breaking them. He said that the teachings of the Sufis were nothing except the reflection of the Prophetic teachings. He further stated that the Sufis always waged practical struggle against the corrupt rulers. He said that teachings of the Sufis were the true essence of Islam. Underlining the need to strengthen our individual and collective bond with the Sufis for restoration of peace and promotion of love, he said that the fragrance of love would spread from the attitude of humility and submission. He said that a heart that was overwhelmed by love would be fountain of peace, security, stability and love in the society. Commenting on the issue of immense price hike, he said that scourge of inflation had brought the middle class to the brink of poverty, adding that the revolution was the only way forward to bequeath bright and prosperous future to the succeeding generations for which incumbent electoral system would have to be sent packing through a peaceful and democratic struggle.

Addressing the seminar, Chairman of Sunni Ittehad Council, Sahibzada Hamid Raza, said that those who were hatching conspiracies against the national stability and security would be wiped out from the face of earth. He said that providing young generation with intellectual guidance and striving to keep patriotism alive among them was the responsibility of the political and religious leadership. He, however, regretted the fact that a conscious negligence was being committed in the discharge of this responsibility. He said that those mandated with the responsibility to furnish guidance by leading from the front were busy in political gimmickry aimed at jockeying for power. He said that real follower of the Holy Prophet (SAW) was the one, who stayed steadfast in his struggle without being affected by the vagaries of time and circumstances.

Sahibzada Hamid Raza said that the terrorism was being bracketed with Islam due to a deep-rooted conspiracy, adding that mutual discord had driven a wedge in the unity of the Muslims with the result that the nation had been divided into factions. He said that those whose forefathers raised baseless allegations against the Quaid-e-Azam and Allama Dr Muhammad Iqbal and opposed creation of Pakistan had become champions of the country. He said that children of those who rendered sacrifices for the establishment of a separate homeland were at the mercy of circumstances.

Paying rich tributes to the role of the Sufis, the leader of Sunni Ittehad Council said that they changed the lives of hundreds of thousands of people through their personal conduct and example. He, however, regretted that their successors did not follow them in their footprints and consequently were unable to play leadership role. He said that our monastic system had fallen prey to differences, adding that the one who who was the lover of the Holy Prophet (SAW) rightly deserved to be follower of Shaykh Abdul Qadir Gillani. He lamented the prevailing state of affairs and said that polio workers were being killed in the name of Islam while religious scholars were being murdered with abandon. The worship places of minorities were being attacked and shrines desecrated. He warned that if we did not move and continued to sit idle at our homes, we would be responsible for the catastrophe that has befallen the nation. He said that it was a point to ponder for the masses and elders of Ahle-Sunnat that the banned organizations were posing as if they were true patriots. He said that those who did not accept the Constitution of this country, and undermined its national security had become greatest claimants of patriotism.