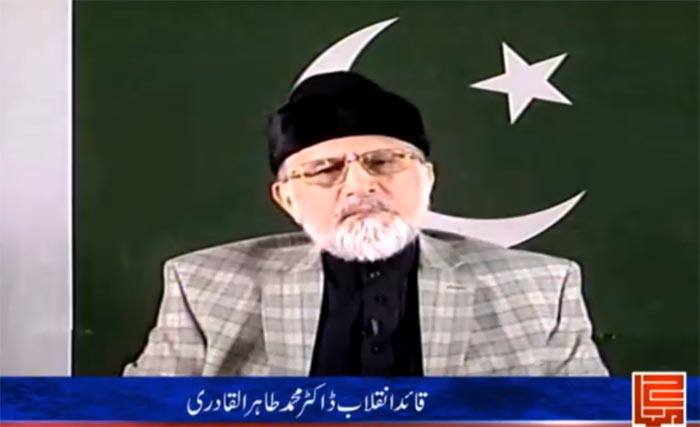 Pakistan Awami Tehreek (PAT) leader Dr Muhammad Tahir-ul-Qadri has said that historic sit-in at D-chowk in Islamabad was a call to prayer for revolution, adding that the people would soon stand up for prayer through countrywide protest demonstrations on May 11. He said that there was hardly any delay between standing up of the people and establishment of prayer. He said that prayer of revolution would soon be ready after the people had lined themselves up, adding that there would be no talks after the establishment of prayer of revolution. He said that the power would be taken from political terrorists and state robbers and handed over to the masses peacefully.

Dr Tahir-ul-Qadri expressed these views while addressing Workers Conventions held at around 500 places in the country including Lahore through a video conference. He said that public demonstrations would be peaceful on May 11, but warned that if an attempt was made to stop these demonstrations through state oppression and police, the rulers would themselves shorten their political life of a few months. He directed workers to continue the door-to-door campaign to enlist the support of the masses for May 11 rallies with determination and courage. He said that if the rascals tried to commit terrorism, the people should make them taste the consequences of their actions.

Dr Tahir-ul-Qadri said that the present government had caused a loss of Rs. 500 under the head of taxation in the first 9 months of their rule. He said that the Supreme Court ruled about 58 key public sector enterprises that the appointment of their heads should not be prerogative of the Prime Minister or any Minister and sought the establishment of an independent Commission to select eligible people as heads of these entities. He said that the current rulers deleted 38 state institutions from the list in utter violation of the Supreme Court’s ruling.

Addressing the PTI chief Imran Khan, Dr Qadri said: Khan sahib; ‘there was no question of derailment of democracy when none existed in the country. Why do not you understand that the state robbery and political terrorism held sway in the country? There was widespread corruption and hooliganism and it was no democracy at all.’ He said that he was staunch believer in democracy but added that what passed off in Pakistan was nowhere near democracy, adding that rigging, fraud, oppression and hooliganism could not be termed as democracy. He said that entire election process was purchased through billions of rupees. He said that polling stations, police stations, and entire clans were bought off with the ill-gotten money. He said that democracy was a system in which people neither sold their kidneys nor did they eat the dead bodies. He said that the present rulers siphoned off tens of billions dollars in one business deal. He asked as to why poor and middle class Pakistanis could compete with the political terrorists and the state robbers in elections.

Dr Tahir-ul-Qadri said that he would give glad tidings of end of corrupt system and enforcement of a new system in his address in the final round of the revolution. He said that 98% of the people longed for fulfillment of basic necessities of life while 2% of the elite thrived on the state resources. He asked the masses to prepare for green revolution, adding that he would give a new system and an election would also be held.