Minhaj-ul-Quran Women League has been working through its multiple departments, each of which is focusing on a specific audience and with a unique theme. This wide array of departments has made #MWL an unmatched and versatile women empowerment platform.#Celebrating33yearsOfMWL

Chairman MQI Supreme Council Dr Hassan Mohi-ud-Din Qadri has congratulated Minhaj-ul-Quran Women League on its 33rd foundation day that is being celebrated across Pakistan today (January 5). In his special message on the occasion, he lauded the struggle of MWL for women empowerment and rights. He said MWL reached reached out to thousands of women through a variety of programs and means and made them part of larger struggle of MQI under the inspiring leadership of Shaykh-ul-Islam Dr Muhammad Tahir-ul-Qadri.

Dr Hassan Mohi-ud-Din Qadri said that MWL's moral, spiritual, and educational efforts have ignited hopes and empowered women by making them aware of their rights. He said that MWL has created a niche for itself thanks to the dedication and devotion of the women leaders and workers who have left no stone unturned to take forward the message of Shaykh-ul-Islam in every nook and corner of the country.

Chairman Supreme Council said that MWL has set up active forums such as those of Voice and Eagers to give representation to the girls and women of every age group. He said that we are proud of the work that our sisters and daughters have undertaken to ensure delivery of education services at the doorstep of the people. He said that it has also been pivotal to promoting the Quran reading culture especially among the children, an endeavor they embarked upon during the spiritual Itikaf. He expressed his best wishes and prayers for MWL to keep making progress by leaps and bounds. 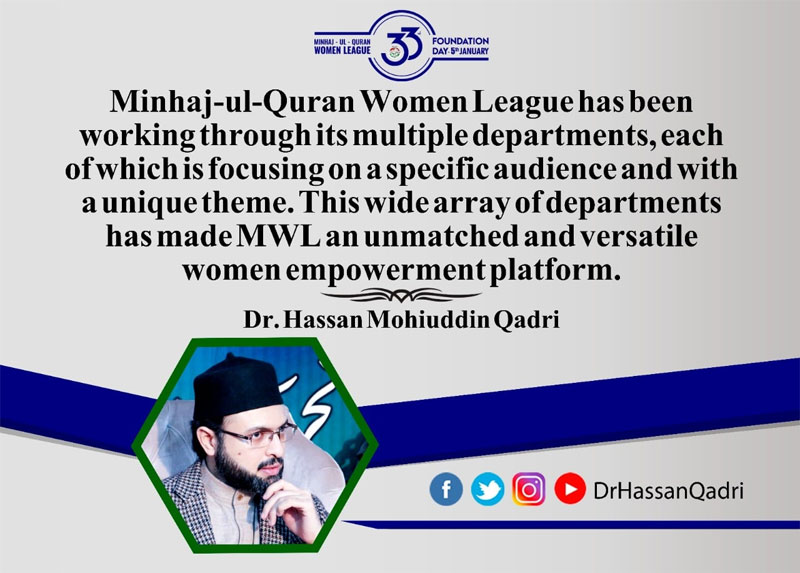